I had written a post on plate tectonics and continental drift for Mrs. Yollis and her class. Two students, Heather and Keira, challenged me to explain how the Earth began. This post is an attempt to provide an explanation according to my understanding of the science. To see the comment and challenge, click the link and scroll down to the comments.

Plate tectonics and our dynamic continents

There are so many stories of how the Earth began if we look though the amazing cultures in our world. It would be remiss of me not to mention one or two. Because of my home and yours, I have chosen stories from the native people of Australia and North America.

The Aboriginal People of Australia

Many people think there was one Aboriginal (native Australian) culture and one language but, before the coming of European colonists, there were many, many of those cultures now lost. One of the best sites I have seen comes from the Yolngu people of Ramingining in the northern part of Central Arnhem Land in Australia's Northern Territory.

For one of their creation stories, click the link Twelve Canoes and wait for the site to load. The picture below will appear. Once loaded, click on the picture indicated by the arrow to see a creation story. 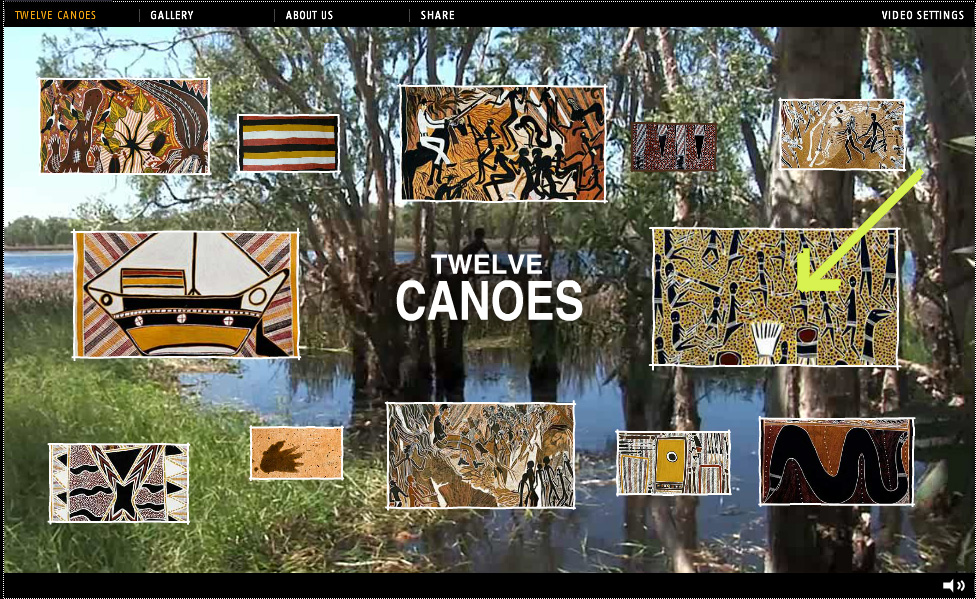 I think you will find many interesting things on this site as well as one of their creation stories.

I found the following You Tube clip telling the story of creation of the Earth through the traditional beliefs of three Native American tribes, the Iroquois, Seminole and Cherokee.

Let's now start looking at what science is finding...

Let's start with some word learning. You have had many ideas in your life but have you ever heard someone say they have a theory? Many people confuse "idea" and "theory".

A scientist has an idea after looking at the information available through study or research and proposes an explanation for what has occurred. Other scientists look at the conclusions and test the idea against other data or new information. This may lead others to agree with the idea. With other scientists agreeing and available evidence supporting, the idea becomes a theory. Science is a path to discovery. We learn more and more about how things work.

Did you know up until a few hundred years back people thought the Earth was the centre of the universe and all of the stars, planets and our Sun orbited around us? This idea is called Geocentric.

A Geocentric View of the Universe

This drawing is based on a map by Bartolomeu Velho (1568) 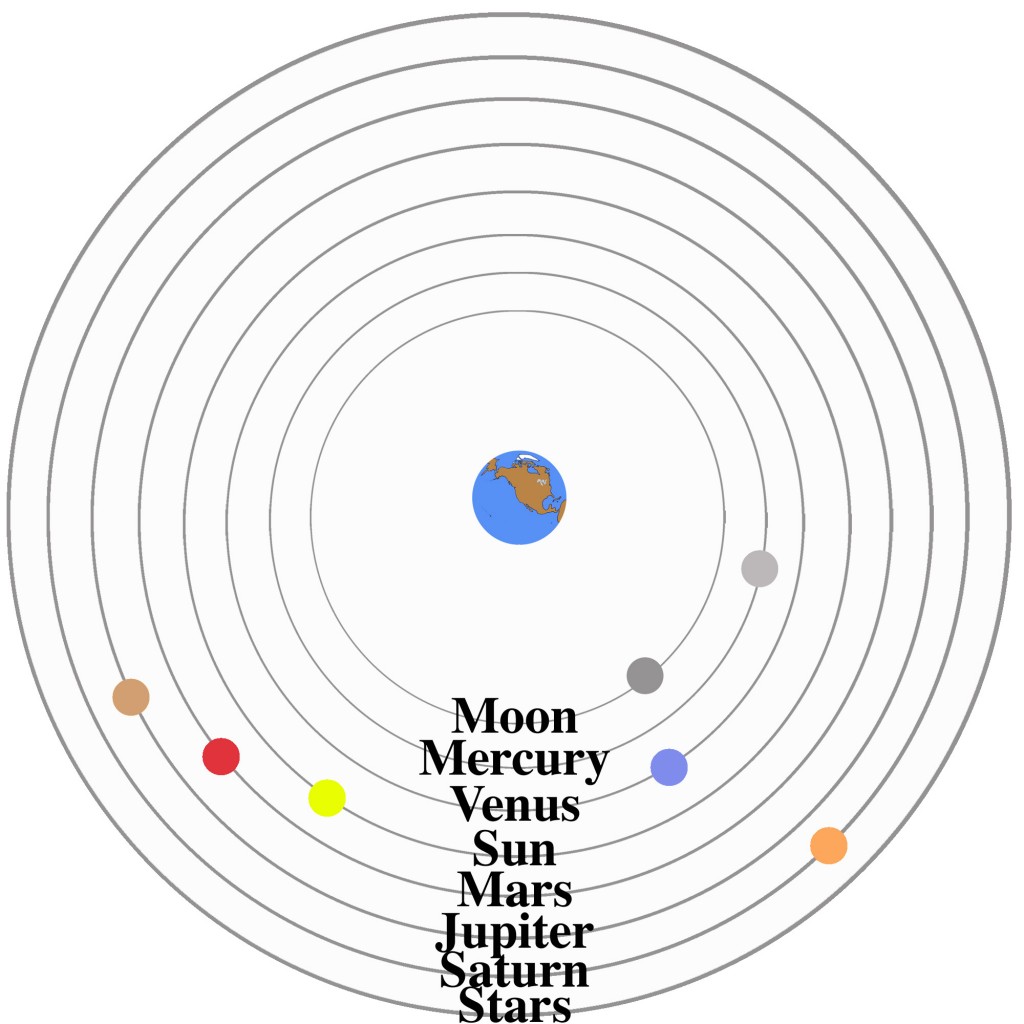 It wasn't until about the 1500s more and more evidence was being gathered to show Earth isn't at the centre of the universe. It is a planet orbiting our Sun and now we know our Solar System is towards the outer edge of a double spiral galaxy we call, The Milky Way. We also know our galaxy is one of very many, probably billions, in our universe. We know this because of what scientists have been able to observe and because of the theories arising.

Watch the below video to see an explanation of what is thought to have happened to form our planet and others in our Solar System. Remember, you can click on the small box symbol on the bottom right of the video to watch full screen.

Now let's look at the information in the video

* About 9 billion (9,000,000,000) years after the universe was born a massive start went Supernova - A supernova is an explosion of a star. It might have been caused by the collapse of the massive star's core. Radiation, energy and stellar dust explodes out from the collapsed star. Back in 1987, we were able to look into the sky and see a supernova astronomers named SN 1987A. Where once nothing could be seen, a star bright enough to be seen without a telescope had appeared. It is said to be 167,885 light years distance. This means the light took 167,885 years to reach us. The supernova happened a very long time ago.

* Gravity began its work on regions of the massive dust "cloud" sent out. The "cloud" particles started to gather. Pressure and heat increased. Our Sun was being formed.

* The Sun used much of the "cloud" leaving only 0.1%. Look at this picture. Imagine the cloud was made up of 1000 students in a school. 999 of them would go to make up the Sun. Just one of them would be left to make all of the planets and asteroids in the Solar System. The little guy in red looks a little lonely. 🙂

Imagine you are the Sun. You have a long, strong elastic attached to a tennis ball and you are spinning it around your head.

Jupiter is said to be 317 more massive than the Earth. Imagine trying to spin 317 tennis balls on the end of the elastic. You wouldn't need to spin the balls as fast to keep the elastic as stretched as one tennis ball. Our Earth takes one year to orbit the Sun (that's what a year is, the time it takes our Earth to go once around the Sun). Jupiter takes about 12 years. If you could spin the tennis balls fast enough, the elastic would break and "Jupiter" would sail off into space. 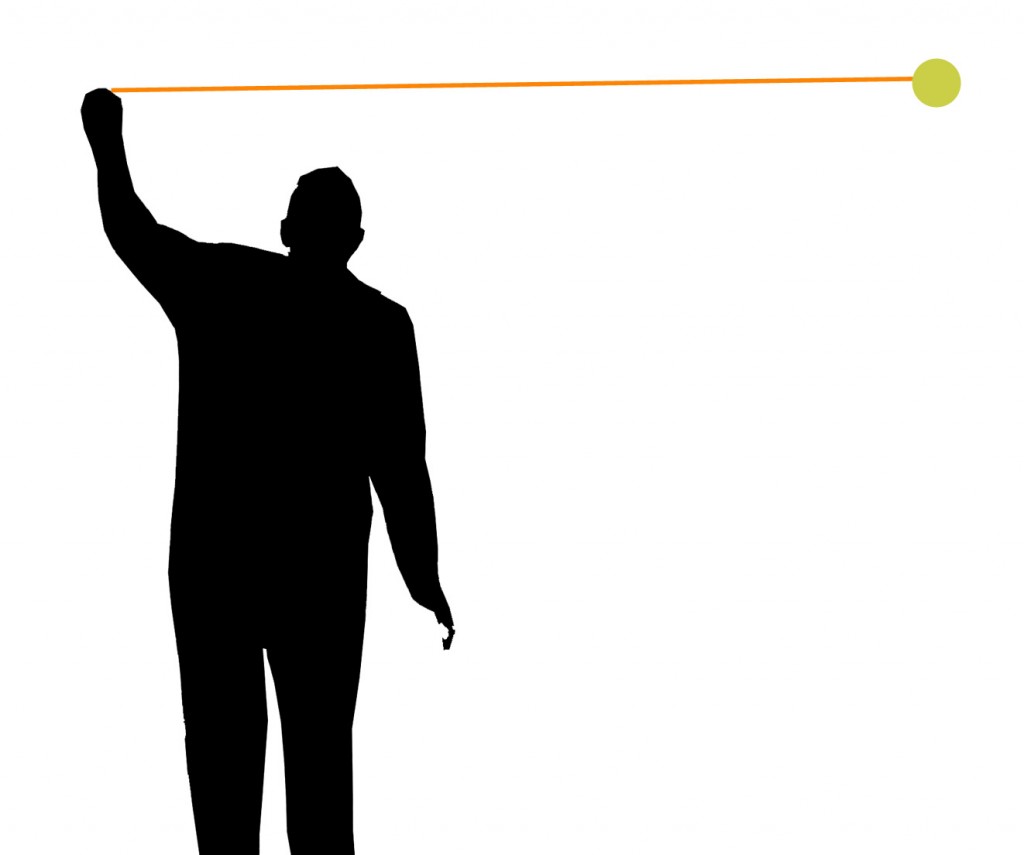 * The debris in the rings around our sun started to collide and come together to form larger masses. Their journey to becoming planets had started.

Have you heard of the asteroid belt between Mars and Jupiter? This ring of debris wasn't able to form a planet because it was being pulled from two sides, the Sun and Jupiter, the largest of our system's planets. Our ring was able to produce a planet which is fortunate for us or I wouldn't be writing this.

* From 4.8 to 3.5 billion years ago (4,500,000,000 to 3,500,000,000 years ago), the Earth was being bombarded from space. Combined with this bombardment, radioactive elements and pressure, Earth became a molten furnace. Heavier minerals like iron and nickel sank into the core and lighter minerals rose to the surface. 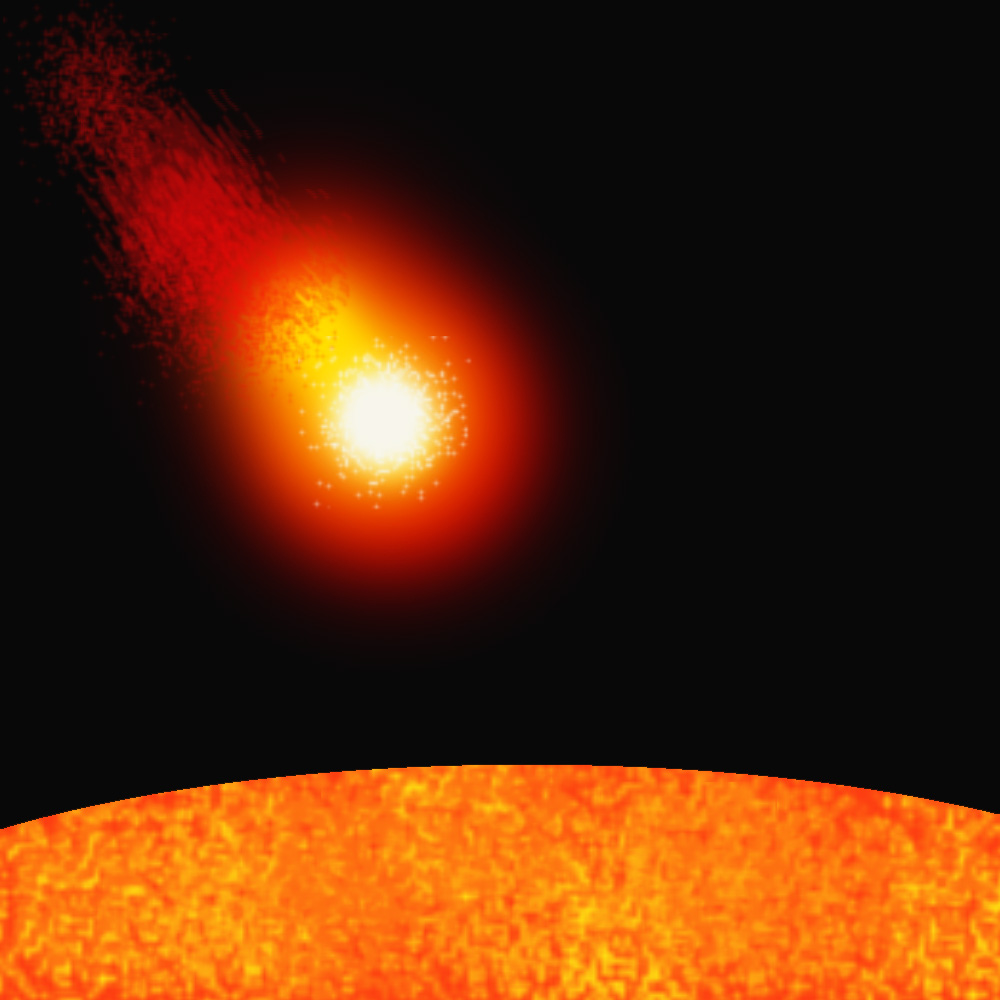 You have probably seen how certain things float while others sink. If you drop stones or pieces of metal into a container of water, they sink to the bottom because they are heavier. Put in olive oil and it will float to the top.

* Around this time a large object about the size of Mars collided with our early Earth. Part of the collided matter broke off to eventually become our moon. The Moon at first was much closer to our planet.

Remember the elastic experiment? Earth's "elastic" isn't quite strong enough so it is gradually "stretching" but the Moon isn't expected to break away, just reach a distance where there is a balance but this is billions of years into the future so we needn't worry.

* Because of all of the heat and volcanic activity throwing out gases, Earth's atmosphere was mostly nitrogen, water vapour and carbon dioxide. We couldn't have survived the heat let alone the poisonous atmosphere.

* As the bombardment of debris from the creation of the Solar System reduced, Earth's surface started to cool. Water vapour cooled and the first ancient ocean formed. The cooling crust of the Earth formed the first land, Pangaea. Remember the layers of the Earth? 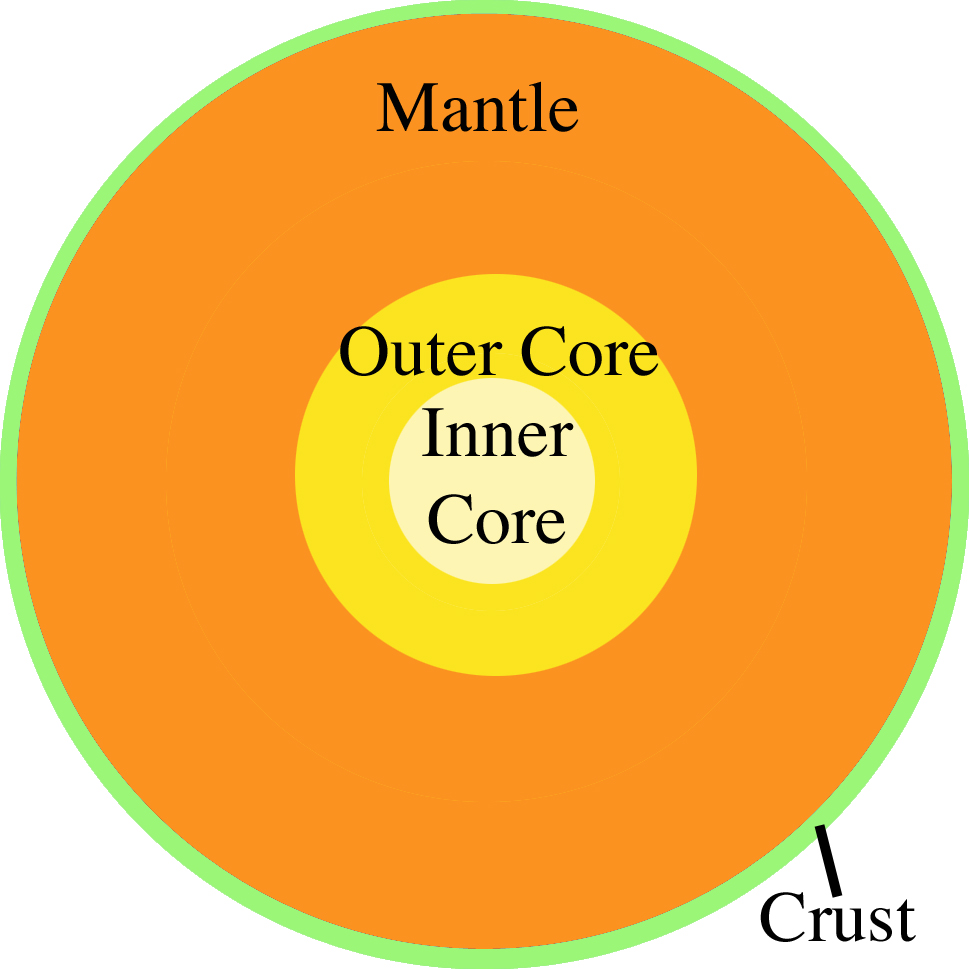 In the  final video clip at the end f this post you will hear it said, if the Earth were a basketball, the crust would be thinner than a piece of paper on its surface yet that's where we live.

* The Earth had an atmosphere and water, conditions needed for the first life but that is another story.

Are there any other systems with planets or are our Solar System planets the only ones? Is there life on other planets in our universe?

I have a favourite quote from a man called, Carl Sagan. He was an astronomer, astrophysicist, cosmologist and author. He wrote a novel named "Contact". The quote comes from his book...

"The universe is a pretty big place. If it's just us, seems like an awful waste of space."

Many people had suspected other stars would have planets but it wasn't until 1988 the first planet outside our Solar System was found. Before this we simply didn't have the technology to do this. Now the possibility of around 2400 planets outside our Solar System are being investigated. It would seem planet formation as is said to have happened with our system is much more common that we had thought. You know I like numbers so look at this...

If there were only 1 billion galaxies in our universe each with 1 billion star, then there would be...

Just say of these only 0.1% (like the amount of material left when our sun formed) had planets, then there would be...

That is one quadrillion stars with planets.

That is one billion planets with life.

But there are probably many more than a billion galaxies in our universe and I suspect life is much more common than the above but reaching planets outside our Solar System to find life doesn't seem likely because of the vast distances between the stars and far greater between galaxies.

As you know, NASA has the Curiosity rover on Mars. Latest news shows it has found rocks on Mars have some of the chemicals necessary for life - sulfur, nitrogen, hydrogen, oxygen, phosphorus and carbon. If we find evidence of life on Mars or that it once existed, we have proof we are not alone but don't expect Martian people. If life is found it will most likely only be something like bacteria.

This one talks of the possibility of a number of land masses forming over time and gives them names. This is quite possible but I am happy enough with just Pangaea unless I find further evidence. The clip does show you how our Earth is protected from harmful radiation from our sun by it's magnetic field caused by our rotating liquid iron outer core. Mars's interior cooled a very long time ago. Solar radiation shed much of Mars's atmosphere but Earth has been protected. Our volcanoes, tectonic plates and earthquakes show us our world is still very active and I am thankful it is.

When checking through You Tube, I found this clip showing an animation of the Big Bang, and the beginning of our system, the Sun, Earth and Moon. This clip has nothing to read just images to watch as billions of years pass.

You know our Sun is much larger than the Earth. It's said it would take about a million Earths to make the size of the Sun but is our Sun a very big star? I found this video clip to show our Sun is so much smaller than the largest known star. This video clip shows just how tiny our Sun is compared to some other suns (stars).

9 thoughts on “How did the Earth begin? – A challenge from Heather and Keira”