REMEMBER: I am not an expert and have to check much of the information below.  If I find any errors, I will correct them as needed.

Natural disasters are part of living on an active planet with an atmosphere.

What do I know about natural disasters?

Volcanoes, earthquakes, tsunamis and our  not so solid world…

Most of you know our world isn’t a solid ball. Here is a graphic showing the Earth's internal layers I prepared for you... 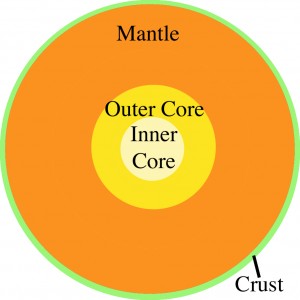 The INNER and OUTER CORE

Now, that’s very hot so should the iron-nickel inner core melt? It is solid because of pressure from the rest of the earth not allowing it to melt.

The OUTER CORE surrounds the INNER CORE.  It is liquid and very hot. It’s thought, like the INNER CORE, to be mostly iron. It’s thought to be very important to life on Earth. Movement of the liquid iron OUTER CORE causes Earth to have a magnetic field (like a magnet with a north and south pole). It’s this magnetic field which protects us from much of the sun’s solar wind (ionised gases). If it wasn’t there, we wouldn’t ne able to live on Earth’s surface without protective suits. With the core of Mars thought to be cold, Mars has little magnetic field and certainly not a whole planet one. We would need suits to protect us even though it is further from the sun than us. 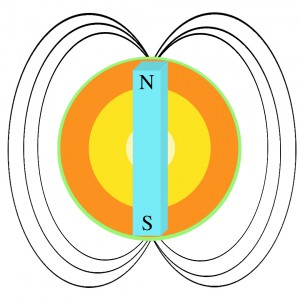 EXPERIMENT: Place a magnet underneath a piece of paper. Sprinkle on some iron filings. You will see the iron filings

The MANTLE is the thickest layer in the Earth. It is solid but is at high temperature so there is movement over long periods of time as cooler material sinks and hotter material rises. You might already know about convection. You know hot air rises because it is lighter and cooler air falls because it is heavier. It’s the same with the rocks in the MANTLE.

OBSERVATION: Have you ever seen a lava lamp? As the wax in the lamp heats, it rises to the top of the lamp. When it cools it falls back down only to be heated and rise again. That is convection.

This is the thin layer we live on. Think of an apple. It has a core, the delicious fleshy part  (like Earth’s MANTLE), and the skin (the CRUST). Like an apple, the Earth’s crust is thin and sits on the MANTLE.

OBSERVATION: Cut an apple in half and look at the cut surface. Imagine it’s the Earth. We live on the thin skin.

The convection (movement) in the MANTLE causes movement in the crust. The Earth’s crust has large sections called TECTONIC PLATES.

The TECTONIC plates rub along each other, go over or under each other, or move apart. Now for natural disasters…

Most volcanoes in the world are found along the edges of the TECTONIC PLATES. Some, like the Hawaiian volcanoes, are over a HOT SPOT. Volcanoes are places where heat and pressure from the MANTLE can be released. There are many types of volcanoes. In Hawaii, you have lava flows whereas New Zealand’s volcanoes tend to be more ash and gases. No matter what type, eruptions can be very dangerous for people living close to volcanoes.

Here is a link to a post I made some time back for a class in England. It shows some You Tube volcanic activity…

Here is another link to a post I made for the same class. It includes some video clips I made while in New Zealand.

In many areas of Australia, you can find the remains of volcanoes once very active millions of years ago. If you know what you’re looking for, they are easy to spot. Where I live, there are plenty of signs of ancient volcanic activity. Here is a photo of an easy to spot one in Queensland. It shows the solidified magma once in a volcano's crater.... 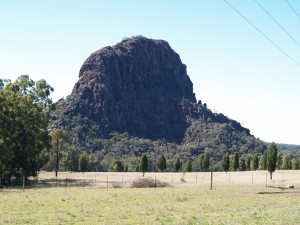 When the TECTONIC PLATES try to move, pressure can build up as they rub against each other. This can happen at the edges of the plates or along fault lines. Eventually, the pressure is too high and the plates or rocks in the fault move. This is an earthquake.

and to a graphic of the types of faults…

When there is tectonic movement, land can move up, down or sideways. Some quakes are small tremors where there is shaking but they can be large and cause much damage. Do you remember hearing about the earthquakes and aftershocks in Canterbury, New Zealand?

Look at the photo below. I took it at a roadside cutting near my town. See how the rock had been forced into curves by pressure. Have you seen layers of rock in unusual patterns? Do you think earthquakes or earth movements might have been the cause? 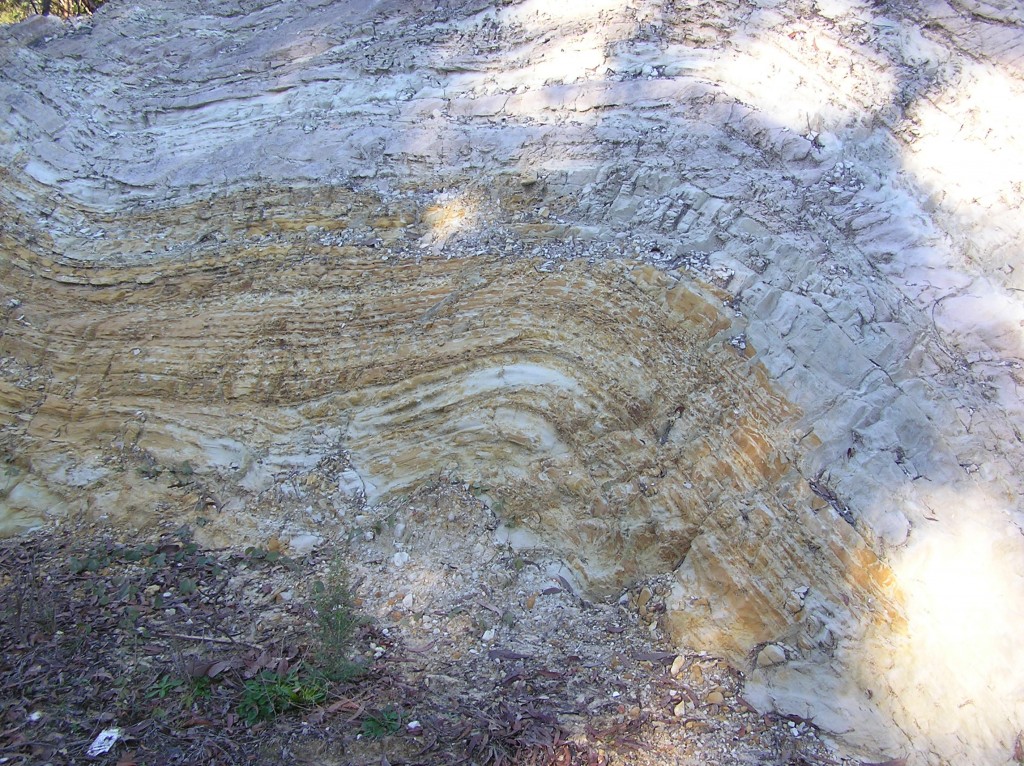 You might have heard about powerful waves called tsunamis. When you go to the beach and watch the waves, these are only surface waves. The water simply moves up and down close to the surface and is caused by the action of wind. If you’ve ever seen a fishing float in the water if you’ve gone fishing, you’ll see it moving up and down. It will only move along sideways if there is wind to blow it or flowing water underneath.

Tsunamis are very different to the normal waves you see. They are much deeper waves and can be caused by underwater earthquakes, volcanic eruptions, landslides or other disturbances including a meteorite impact in the ocean. When an event occurs, huge amounts of water is displaced (moved).

If you were out on the ocean, you mightn’t even notice a tsunami pass as it might look like any other wave but it goes much deeper than a normal wave. As a tsunami approaches shallower water, the deeper waves rise up and move in on the coast.

In 2004, there was an underwater earthquake near the island of Sumatra in Indonesia. A large amount of water was displaced and spread out across the Indian Ocean. With Sumatra being so close to the earthquake location, large waves washed ashore causing a huge amount of damage to the town of Banda Aceh.  The more distant from the site of the earthquake, the less the effect,

Here is a Wikipedia link to an aerial photo of Banda Aceh taken after the tsunami.

OBSERVATION 1: Have you ever dropped a large rock into a still pool and seen water splash up and waves ripple out? This gives you the idea the way waves spread out from the point of origin.

OBSERVATION 2: When you fill your bathtub to the top then get in, what happens? This is water displacement as your body moves water away as you get in.

WOULD IT BE BETTER NOT TO HAVE SUCH AN ACTIVE EARTH?

If you remember, I’ve already explained our active, hot Earth protects us from much of the effects of the sun. If our Earth’s interior cooled and went solid, we might not have problems with earthquakes and volcanoes but we would be exposed to dangers from the sun. Earth might become more like Mars.

I think we are fortunate to have an active Earth even if it sometimes causes natural disasters.

If you are interested to find out more about natural disasters, The Australian Government Geoscience Australia website has information on (CLICK TO GO TO THE SITE)…

You can also check Wikipedia for information.

I always enjoy a good story beginning. You asked us to predict what might happen next. I love a writing challenge.

Here is what 4KM and 4KJ shared…

The door creaked as Sam carefully pushed it open. It took a few moments for Sam’s eyes to adjust to the dark. Her heart was beating rapidly and she could hear herself breathing heavily.

Sam’s mind was racing with thoughts of what she might find inside the small room. She made herself take a step forward. Suddenly, something caught her eye and she jumped…

My prediction of what happened next…

A voice was heard, “What brings you here child?”

Recovering from her initial surprise, Sam studied the little creature before her. It was small and green but it’s care-worn face spoke of wisdom and great age. Not human-like yet, somehow, it seemed familiar, at least to Sam’s eyes.

Again the voice, “Are you deaf, child? What brings you here?”

“Strange child, you have but two eyes yet you speak of three. Where is your third eye? Is it on the back of your head?”

“First three eyes and now you speak of sheep. What a strange creature you are. You are a giant with long string on your head. Your fur is of different colours and your feet are hard and leathery. Can you not speak more?” the creature asked.

Sam finally recovered, “I beg your pardon. You surprised me when I first saw you. I have two eyes and no sheep. The string is my hair, the fur my clothing and the hard and leathery feet are shoes.”

“Finally,” the small creature smiled. “Who are you?”

“Yes,” came the reply. “The White Rabbit sent me to remind you you’re late. Come, we must go.”

My challenge to anyone interested: Now, what do you think Sam did next? 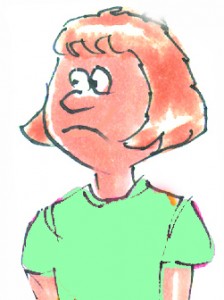