I have had a very busy time over the last couple months but the New Year brings a time when my filming work slows and blogging speeds up so I will hopefully be visiting blogs more often.

Seeing your post reminds me how different our seasons can be. We are having warm to hot and humid days with storms about. Tourist numbers are now at a peak in our town as visitors come to enjoy our region and the beaches. Children are excited because, at the time of writing this comment, Christmas Day is less than 24 hours away and starts for us 19 hours before you. A white Christmas for us would more likely be the hot sunlight reflecting off breaking waves.

What really caught my attention was the following line…

The earth's axis always tips about 23 1/2 degrees from a line perpendicular to its path.

It brought four questions to mind.

The planets rotate on their axis. Seems hard to understand? Maybe you have seen a basketball player start a ball spinning on their fingertip. For this to work, the player must have their fingertip at an axis point. Here’s a short animation I prepared…

This is what is happening to the Earth as it orbits the sun. It is tilted at 23.4 degrees to the circle made (ecliptic).

* The player couldn’t really do this because gravity would make the ball fall.

After a little Wikipedia research, I thought I would prepare a graphic for you to show the planetary tilts. 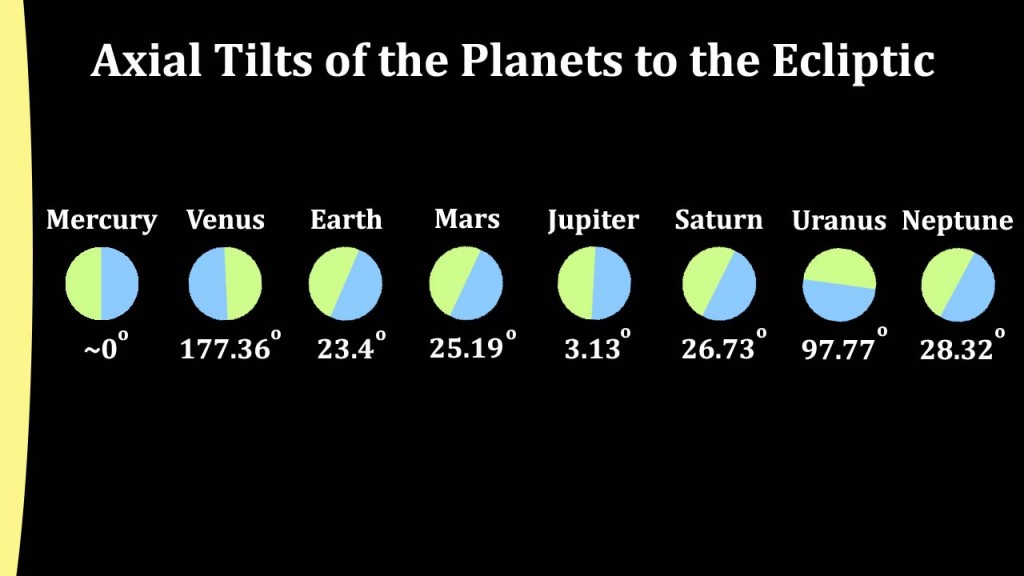 You might notice all of the planets have different tilts but some have some very interesting tilts.

Mercury has hardly any tilt at all and Jupiter only a small tilt.

Uranus seems to almost be on its side.

Venus seems to be upside down.

When we have a solstice (longest or shortest day), we are most tilted toward the sun (summer solstice) or most tilted away (winter solstice). The tilt hasn’t changed. We are just in different parts of our orbit. The equinoxes (day/night the same) occur in March and September when our tilt doesn’t bring either hemisphere closer.

Imagine, without any tilt as Earth orbited the sun, we wouldn’t have any seasons.

In the graphic, the Earth is not tilted in orbit. The equator is always towards the sun and the poles furthest away. The further we go north or south of the equator, the cooler it would become. Daylight and night would always be the same length throughout the year although days would be shorter the further north or south of the equator you were. Weather would be different to what we have now. I wonder if you can think of weather we only have in certain seasons?

We don’t really know why the planets are tilted as they are but it is possible early collisions with other pre-planets while our planets were being built may have set them at a tilt. In another post on this blog, I mentioned an early collision happened between two pre-planets. The resulting collision formed our Earth and much of the thrown off material became our moon. In this collision, the Earth may have become tilted as it orbited the sun.

We have a pretty amazing planet with so much to explore and learn. I am grateful we have a tilted planet so we can experience the changing seasons.