Your post is wonderful. While I have never written a cartoon book, your guidelines would help me. I do like cartooning and often draw cartoons for children when I help our school holiday playgroup. My favourite characters to draw are animal characters. Here is one of my oldest characters if you are interested... 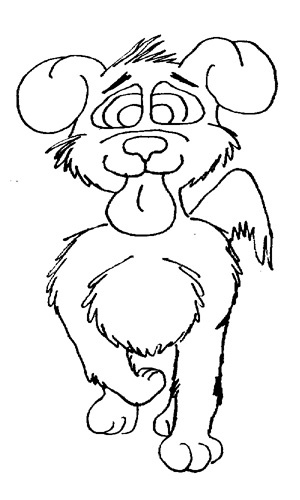 Have you ever written a book? Tell us about it.

I have written some books but none have ever been published. The last story I had time to write was over 48,000 words and was entitled, "Samuel Samantha". It was about a boy called Samuel, although he prefers to be called, Sam. When his parents witness a crime, he has to pretend to be a girl in this story. He doesn't face any real danger but he finds some of his ideas about girls change. He realises a girl can also be a best friend. 🙂

What steps did I take?

Perhaps I am a little different in that I don’t write down ideas for a story first. I tend to develop the ideas in my imagination then start to write out the story. When I start typing, I can often write a few thousands words within a day. It’s as though I am seeing the story in my mind and type what I see.

“Samuel Samantha” was just like that. I wondered what would happen if a boy about eight had to pretend to be a girl. The first step was to decide why this would happen then what events would happen as he took on the role. As I like a story with some sort of message, the story had to end with Sam learning something.

No matter what I have written, the next steps take longest, even longer than the writing itself. I have to edit the story…

1. I check for spelling or punctuation errors. It’s so easy to make them when you are typing quickly.
2. I need to make sure characters are the same throughout the story. Imagine if a boy named John is a man in the next chapter even though only a day has passed.
3. I look for tense errors. If I am recalling a story from the past, it shouldn’t suddenly be the future.
4. I read and reread the story just in case there are errors in consistency of the storyline. I need to know each chapter follows on from the one before so the whole story makes sense.
5. I reread again. It’s strange but I am never completely happy with a story I’ve written.
6. Finally, I decide it’s time to stop. That can be as hard as all of the editing but a writer must stop at some time.

I’ve probably left some things out but I think you get the idea. My problem is, when I decided “Samuel Samantha” was done, I was sad because Sam and his friends had become important to me and I knew my adventure with them was over.

2 thoughts on “About Writing – For Sasha, Mia, Sammy & Parsa”