This post is to give a little information about the last two of six samples you should soon have.

The small iron sand sample I've sent came from a riverside beach on the North Island of New Zealand at a place called Awakino. You can use Google Earth to locate the river mouth in the photo below.

Iron sands (or titanomagnetite) were eroded from volcanic rocks and washed down rivers. The sands can vary in iron content but at Awakino are 95+% iron. The sand is very easily picked up by magnets but is hard to get all of it off again so if you try to pick the sand up with a magnet, wrap the magnet in paper to make it easy.

Iron sands are mined in places because of their high iron content. The site below gives some more information...

The picture below has been scanned from a slide taken over 25 years ago on one of my trips to see New Zealand's sights and especially the volcanic areas of the North Island. 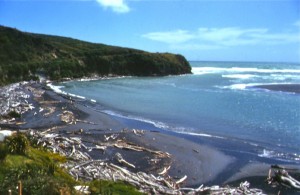 Pumice is a 'frothy' lava formed when super-heated lava under high pressure mixes with water such as in underwater volcanic eruptions. When the lava is released, the sudden change in pressure and rapid cooling form gases in the cooling rock. The pumice stone is very light and can float on water.

I think the pumice stone I have sent you came from an underwater eruption near Tonga in about 1984. Huge rafts of the pumice floated towards Fiji, some even making it to the shores of Australia where I found the sample on a beach.

For more information on pumice, the Wikipedia link below may help

Remember you can check out Tonga and Fiji using Google Earth. The image below shows Fiji and Tonga. You can see Tonga is really the tops of peaks in an underwater mountain range. You can use Google Earth to view other areas. Try places such as Hawaii's Big Island, Yellowstone National Park in USA, Mount Etna, Mount Vesuvius, Iceland, Mount Kilamanjaro and any other volcanoes or thermal areas of interest. Google Earth can almost take you inside. 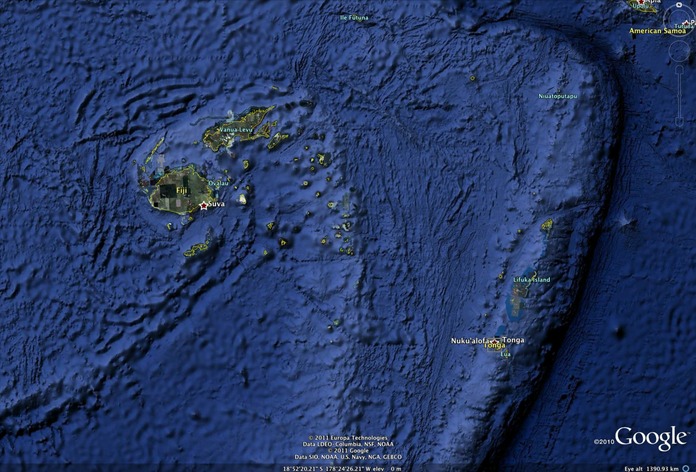