After reading your post and watching your video presentations on Smooth Moves, I was fascinated. Science is one of my favourite subjects so I decided to search for more information on your topic.

What is science? Looking at ideas, hypotheses and theories.

Definition: The process of moving, or changing place, or position.

Motion seems simple. An object goes from one place to another but I will give you something to consider.

A man is looking out a window when he sees a building pass by very quickly. Was the building moving?

I think most of us would say the man must have been moving because buildings don't pass windows. Look at the next.

A man is looking out of his window when he sees a bird pass the window. Was the bird or man moving?

This isn't as easy as it seems. Do you know why?

Definition: strength or power exerted upon an object.

Force is anything acting on an object. It can be pushing, pulling, gravity, a ball hitting you or even mum and dad telling you to do your homework or else. 🙂

Look at the picture below... 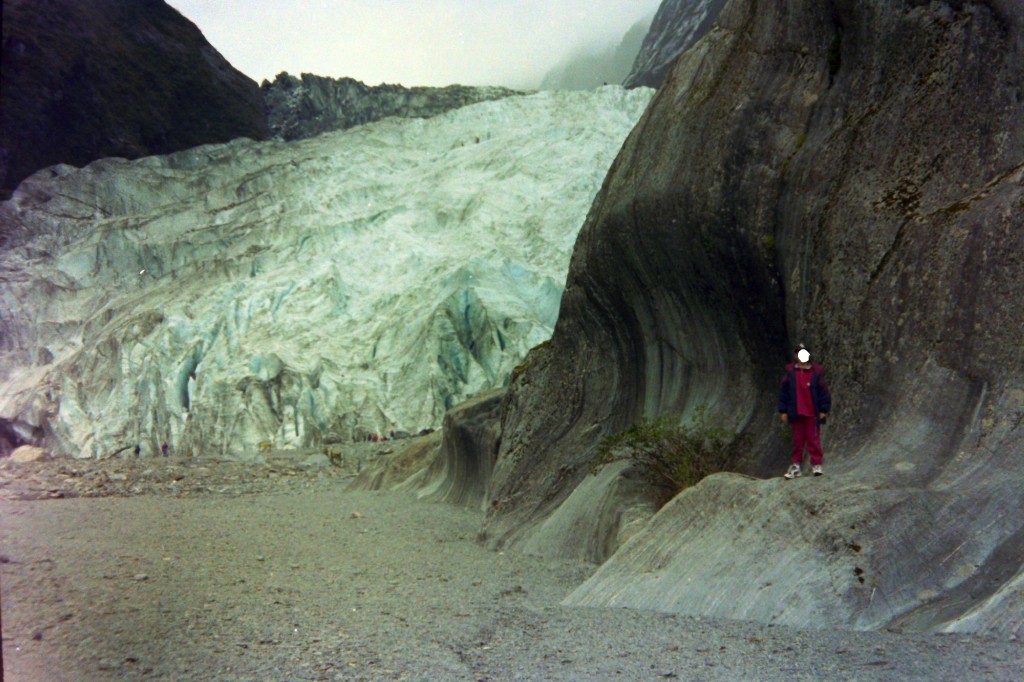 This photo shows New Zealand's Franz Joseph Glacier. In colder, wetter times, the glacier gets bigger. The force of the moving ice pushes rocks down the valley. In the photo, you can see a boy standing on a rock ledge is standing on a curved groove rubbed into the stone cliff by the moving ice and rock. Can you imagine the force needed to push rocks together like this?

Definition:the resistance to the relative motion of surfaces of bodies in contact.

When two surfaces move over each other you can have friction. Rub your hands hard together and you will hear them rub and feel the warmth the friction between your two hands causes. When friction is high, two objects have more difficulty moving along each other's surfaces. It takes more force to make them move. When friction is low, two surfaces can move easily across each other. Look at these examples and decide which has high friction and which has low.

An ice skater's skates glide across the icy surface. Is friction high or low?

You rub your hand across rough sandpaper. Is friction high or low?

What about extreme examples in nature? Earthquakes also result from a friction reaction. Two great masses of rock push along each. They can become locked together not moving until force builds up enough to break the hold. The You Tube clip below discusses earthquakes.

Definition: to exert force upon or against a thing in order to move it away.

Pushing is something you well understand. We use force to move things away from us. Which of these is an example of push?

Definition: to haul or draw towards oneself or itself.

Whereas pushing moves things away from us, pulling moves them towards us. Which of the following is an example of pull? 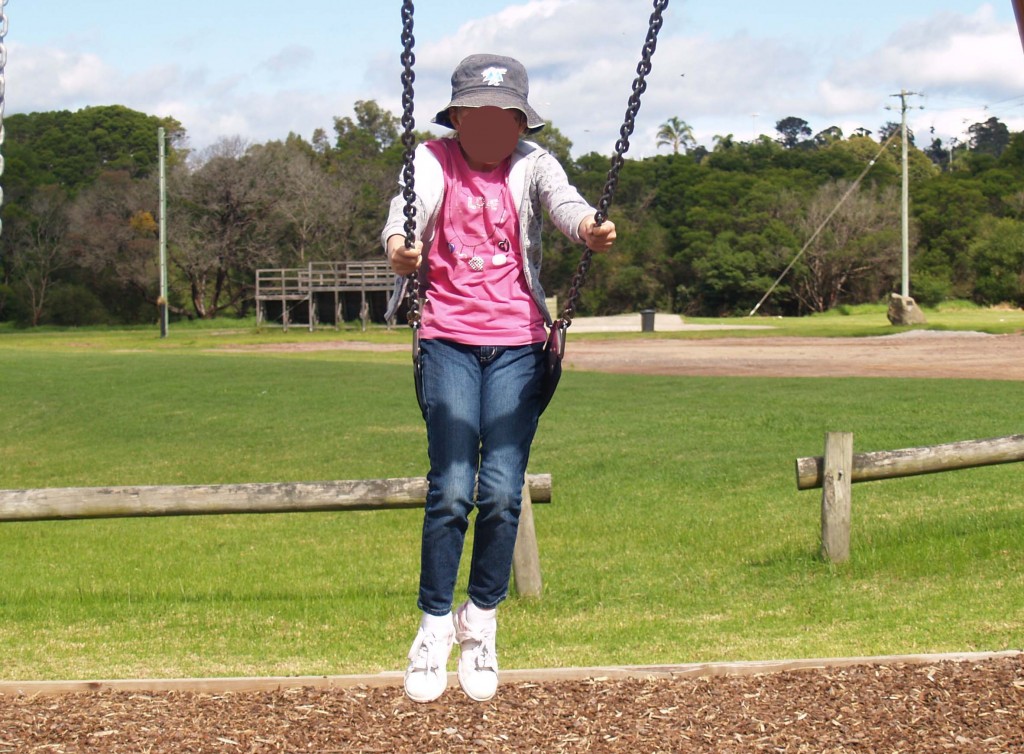 Definition: the force of attraction by which terrestrial bodies tend to fall towards the centre of the earth.

I wasn't completely happy with the definition for gravity I found in my dictionary. All objects could be said to have gravity, even us, but it's the larger bodies that are large enough to have a big gravitational effect on us. This means gravity is different on different planets because they are different sizes and masses. If you were to stand on the Moon, you would weigh about one sixth your weight on Earth.

If you were able to stand on the Moon without a spacesuit, would you be able to jump higher and further than on Earth?

Here is a link to a site where you can find what you would weigh if you were able to stand on other planets, the Moon or our sun.

Your weight on other planets, the Sun and the Moon

Did you know gravity changes, and therefore your weight, the further you move away from the centre of our Earth? Someone standing on the top of Mount Everest would be a small amount lighter than the same person standing on a beach beside the sea.

Look at the below photo taken many years ago... 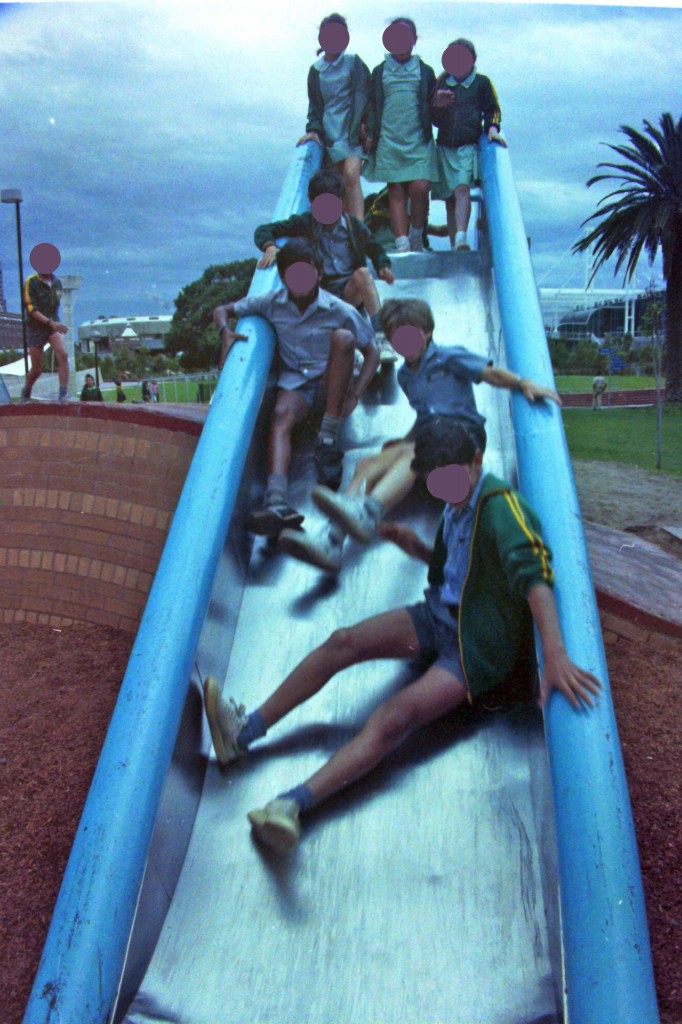 It's gravity allowing us to go down a slide but we don't go too fast because friction helps to slow us. The friction comes from us sitting and you can see the boys also using their hands to slow themelves. Without any friction as we sit on the slide, what might happen?

Definition: the quantity of motion of a moving body, equal to the product of its mass and velocity.

Momentum is what we have when moving. Unless something acts on us, we will keep moving in the same direction. On the slide photo above, friction slows the momentum of the students.

In 2007, Queensland ran a TV commercial about stopping distances for cars. In each case, the car is the same but the speeds (velocities) are different. Watch the video below then see if you can answer the question...

Did the different speeds (velocities) of the car make a difference to how long it took the car to stop?

Did you know if you were in space away from the Earth and Moon and were able to use a spray can, the spray coming out of the can would start you moving? If nothing such as gravity or friction acted on you, you would continue in that direction and not stop.

Voyager I and II spacecraft were launched into space back in 1977. Their course took them out beyond all of the planets in our solar system. They will continue in the directions they were sent unless something stops them. This means their journey might last hundreds or many thousands of years. What a journey!

The link below shows you how far from Earth Voyager I and II now are. You will see the distances changing as you watch because they are moving very quickly. Voyager I is now over 18,000,000,000 (18 billion) kilometres from Earth.

How far from Earth are Voyager 1 and Voyager 2?

Now for a Little Science Fun

After making this movie clip, Professor Flurfflefinger disappeared. Some believe he never really existed and the movie clip was a prank. Others believe he accidentally turned his anti-gravity on himself and is floating somewhere out in space. Still more believe real scientists laughed at his ideas so he now is in hiding promising to never talk about science again.

Do you think his demonstrations are real or fake? Why?