After being one of the classes to receive some baby Australian animal card sets, members of the Battalion Bloggers class became interested in the bilby. This small marsupial, as they pointed out, looks a little like a rabbit. Being a marsupial, it is more closely related to kangaroos and koalas than placental mammalian rabbits. With their observation of similar appearance to rabbits and with Easter approaching, I mentioned Australia has chocolate Easter Bilbies as well as bunnies. 30c from each sale of the 150g Easter Bilby is donated to the Save the Bilby fund. Bilbies are endangered in the wild.

This extra information brought even more comments and questions so I decided to send a gift to the Battalion Bloggers. Here is a photo of one of three inside their gift... 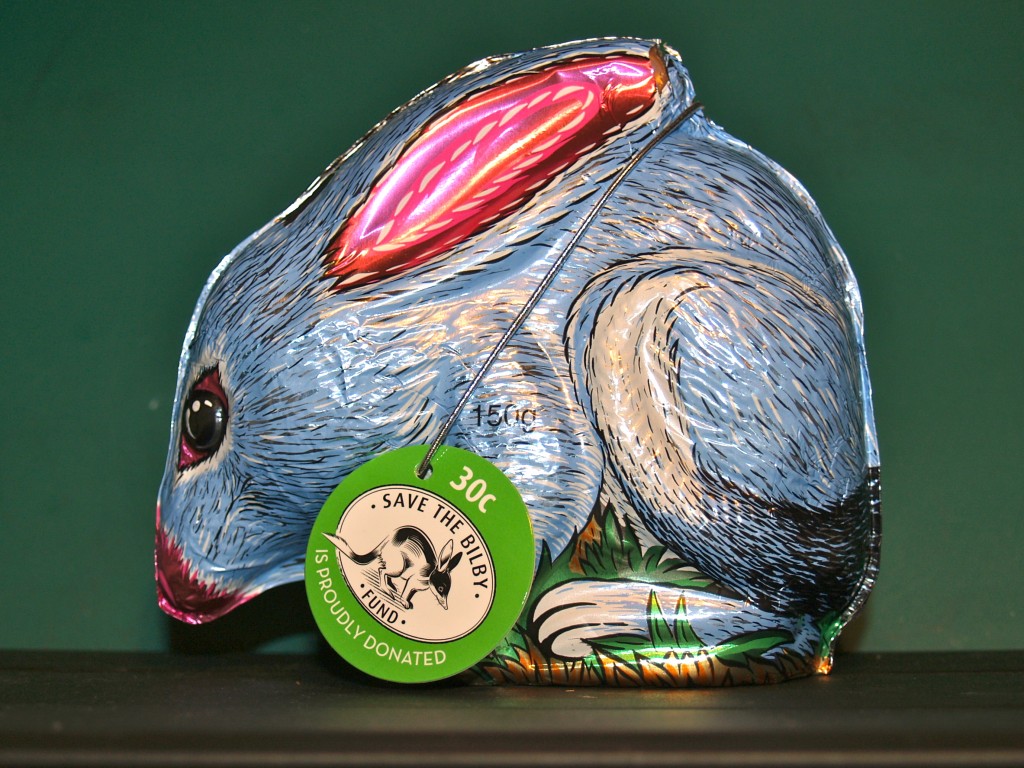 Their post after receiving the gift, linked above, shared comments from the students. Below are my replies...

Jenna, Catherine and Hilary – It was the interest your class showed in bilbies and Easter Bilbies that gave me the idea to send them. While they can be bought online, the trio were bought in a department store.

Bilbies are desert dwelling animals so they aren’t found in my area. They are omnivores (eat plants and animals) and do look like rabbits but are marsupials (pouched animals) like kangaroos and koalas. Rabbits are placental mammals like us.

Unfortunately, no zoos near me have bilbies but Taronga Zoo in Sydney does. The bilbies at Taronga Zoo will be having a royal visit shortly…

Because I sometimes send parcels, I keep some styrofoam packaging just in case I need to pack a special item. I knew to survive the trip to Canada the bilbies would need to be well packed. I thought the styrofoam would help protect them from heat and bumps. I was very happy when I read they arrived safely.

Lane – Parcels can be mysteries before they’re opened. The tension builds as we open them and finally can see what’s inside. Seeing questions from you class about bilbies and their chocolate cousins gave me all the excuse I needed to buy some for a class so interested. It’s not the first time I have bought merchandise from the Save the Bilby Fund people but the chocolate bilbies are the tastiest. 🙂

Sam – Bilbies are very cute and I hope to be able to take some photos of my own but it seems I would have to travel to Sydney over 500km from here to do so. Next time I have the chance to visit Sydney, I’ll have to visit Taronga Zoo and hope my cameras can handle low light. The bilbies are nocturnal animals in the wild. They are active at night so they have low light their zoo area so visitors see them during the day. 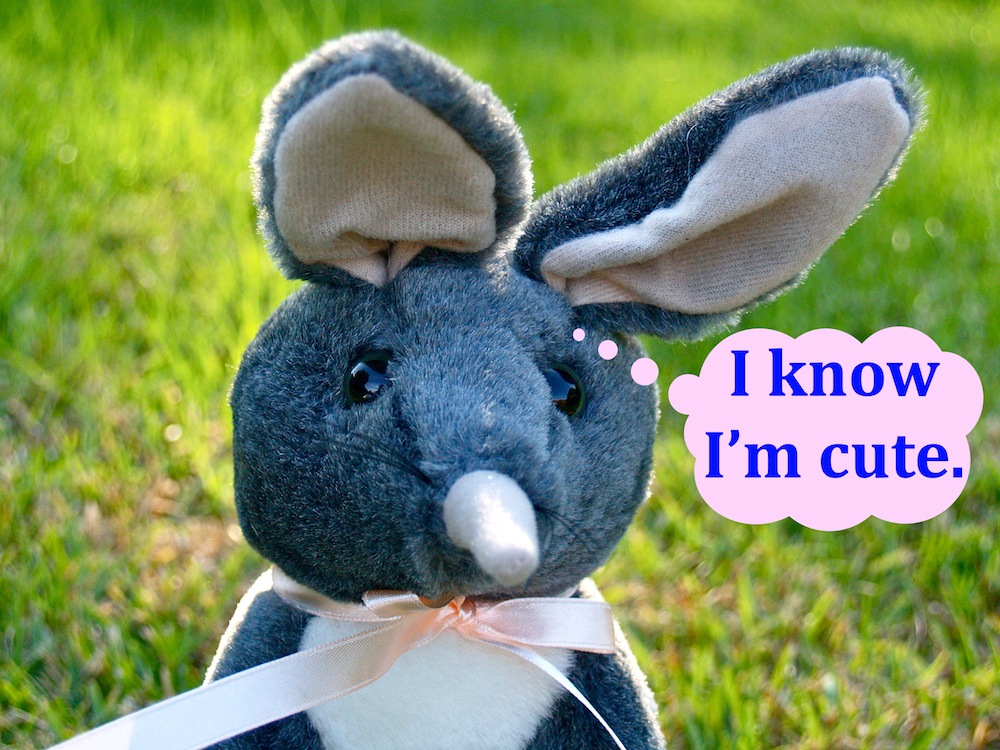 Melvin & Kale - Every year I would buy some chocolate Easter eggs for my class as a reward for their hard work. Since retiring, I haven’t had a class for which to buy them until your class showed interest in bilbies at just the right time of year. 🙂

Noam and Claire – The real bilbies are even cuter than the chocolate ones. Here is a link showing the bilbies in Perth Zoo on the other side of Australia. What I like about this link is it also shows the young joeys (baby marsupials) in the mother bilby’s pouch.

Alex, Amy & Ethan - As cute as chocolate bilbies might be, I can’t resist the chocolate. That’s why I have photographed them. I keep the photos and eat the chocolate.

In the wild, the bilbies have suffered by the introduction of rabbits, foxes and cats to Australia. The Fund helps set up fenced areas to help their numbers grow. 🙂

Martin, Cohen and Zyne – It can be a wonderful experience to receive an unexpected gift and try to guess what’s inside before opening the box. I would buy Easter chocolate for my classes every year. Now I am in contact with classes around the world, I only needed an excuse and your class’s interest in bilbies gave me the reason I needed. 🙂

Bilbies have even been included as characters in children's books here in Australia. Below is a photo of three books I have in my library... 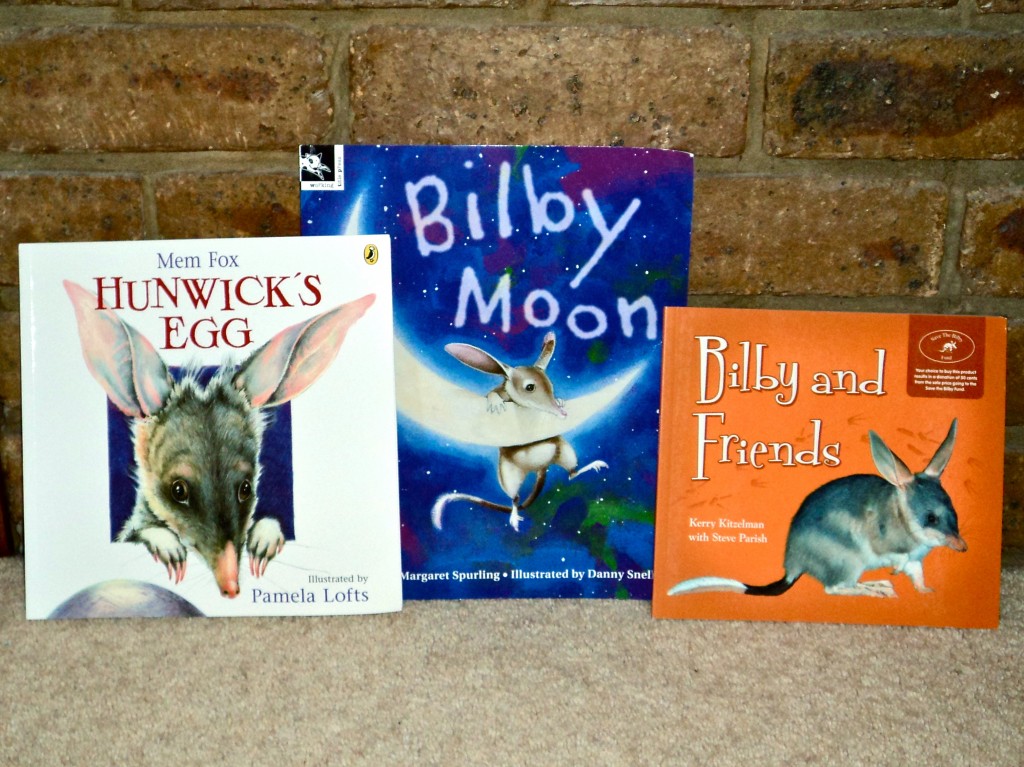 This graphic should not be used & is only available to demonstrate some available bilby storybooks for children.

Hannah – I think we have something in common. As cute as they are, I wouldn’t be able to resist tasting the chocolate inside. We can buy Easter Bilbies online but here in Australia I know shops that sell them each year. They even have packs of 6 small bilbies but I liked the size I bought for your class because they are closer to the bilby’s size than the small ones.

Kelly and Kennedy – Can you imagine how hard it would have been to share only one bilby in class? I already had a box available and realised I should have been able to pack three bilbies safely inside. The foam was an attempt to protect them from heat and shocks so I’m not surprised that didn’t make a noise when the box was shaken. 🙂

2 thoughts on “Bilbies, Chocolate and a Dilemma for the Battalion Bloggers”