For the students who sent me a kind gift. Here is a link to their blog...

Well, it did take some time for the parcel to arrive but, as you already know, it finally appeared. Here is what I found inside... 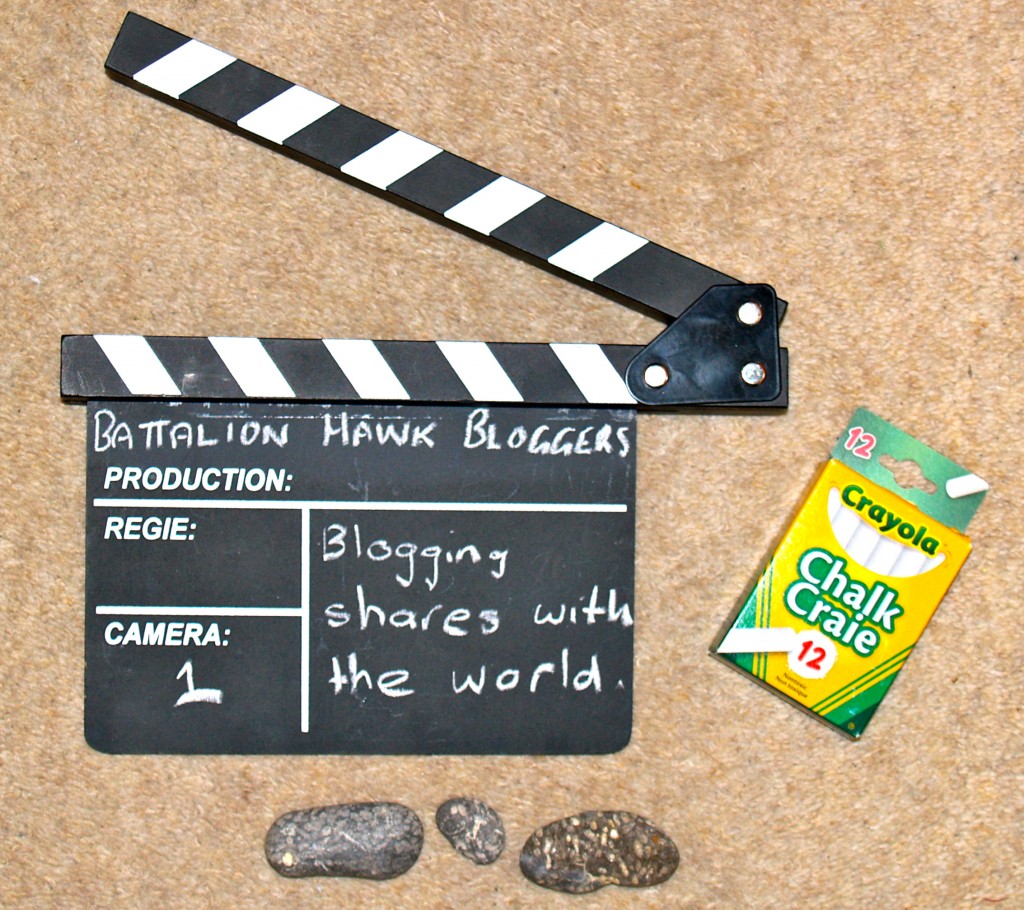 A clapper board to help me align video clips.

A packet of chalk so I can write on the board.

Just by chance, later the same day your parcel arrived I had a phone call. I was asked if I was willing to video the opening performance of the Candelo Village Festival. I agreed and realised I had the chance to use the clapper board very soon after receiving it.

This also presented me with another idea, I had a blog where little had been posted as I didn't have a strong use for it. I cleared away some old posts, some of which ended up on this blog because they were my earliest extended comments. After reorganising the layout and content,  I renamed it...

Exploring Ideas: How to and why… A look at blogging, graphics and activities

The idea is to use this blog when I explain how or why I do things the way I do. I left two posts from March, 2012 because they looked at how to write a googol (special number where 1 is followed by 100 zeroes) and how I approach writing a story, particularly long ones.

Your gift gave me an idea for the first post made especially for the blog. It tells how I used the clapper board. I have included a video clip I made for you showing me use the clapper board to mark the film position. I also included 15 seconds of a performance so you can hear a little of my experience on the evening of Friday (April 12).

The people have been deliberately blurred for privacy reasons. You will not have heard the song before as the music festival opening included original works by local composer/musicians. Here is the link to the first real "How to and Why" post...

Now, let's look at the rocks you sent. There were the three stones and something sounding fossil-like. I'll explain shortly...

Both suggestions people made through Twitter seem reasonable and both types of creatures still exit in our oceans today. Of the two choices, I would favour crinoid-like fossils but, remember, I am not an expert so this is only my opinion. There is a third option I might add soon. Let's look at the two choices... 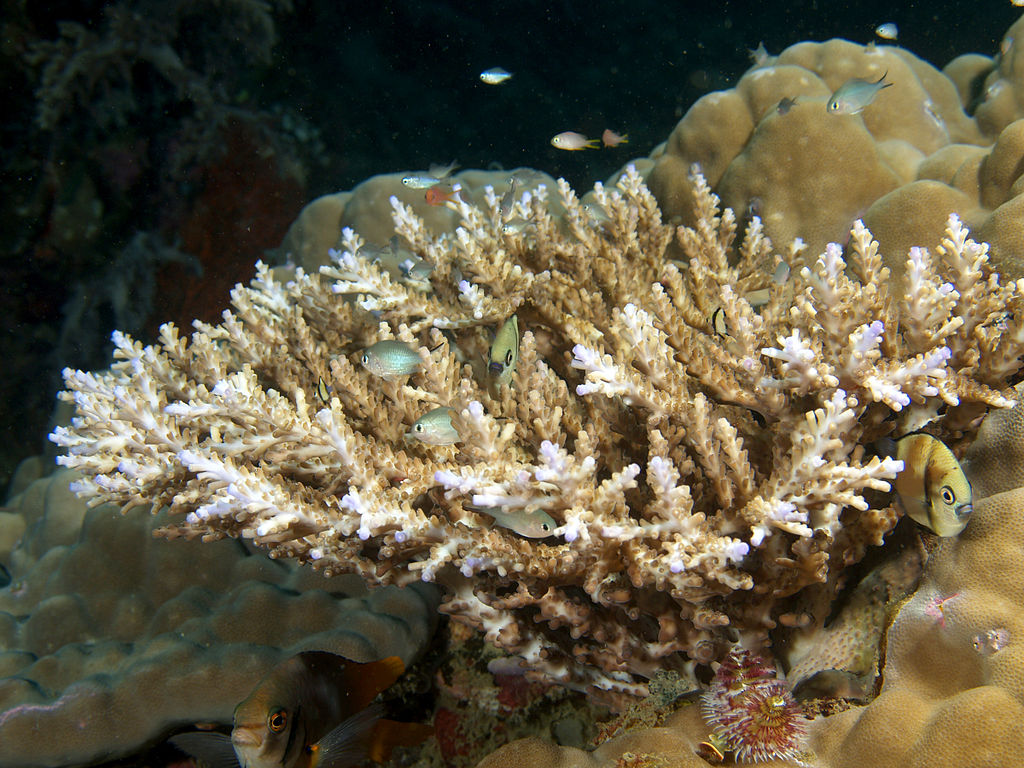 Corallite, if I have my information correct, is the fossilised remains of stony corals. When you look at photos, you can see they are well formed, rock-like structures so I would expect fossils of them to include a more regular pattern than in the samples you sent (see the photo below). Of course, it is also possible what you see in the rocks are broken bits of coral cemented together in the way sedimentary rocks can form.

Below is a photo of a piece of coral I found washed up on the shore in Queensland. It came from the Great Barrier Reef. Can you see the pattern of openings where coral polyps once lived? 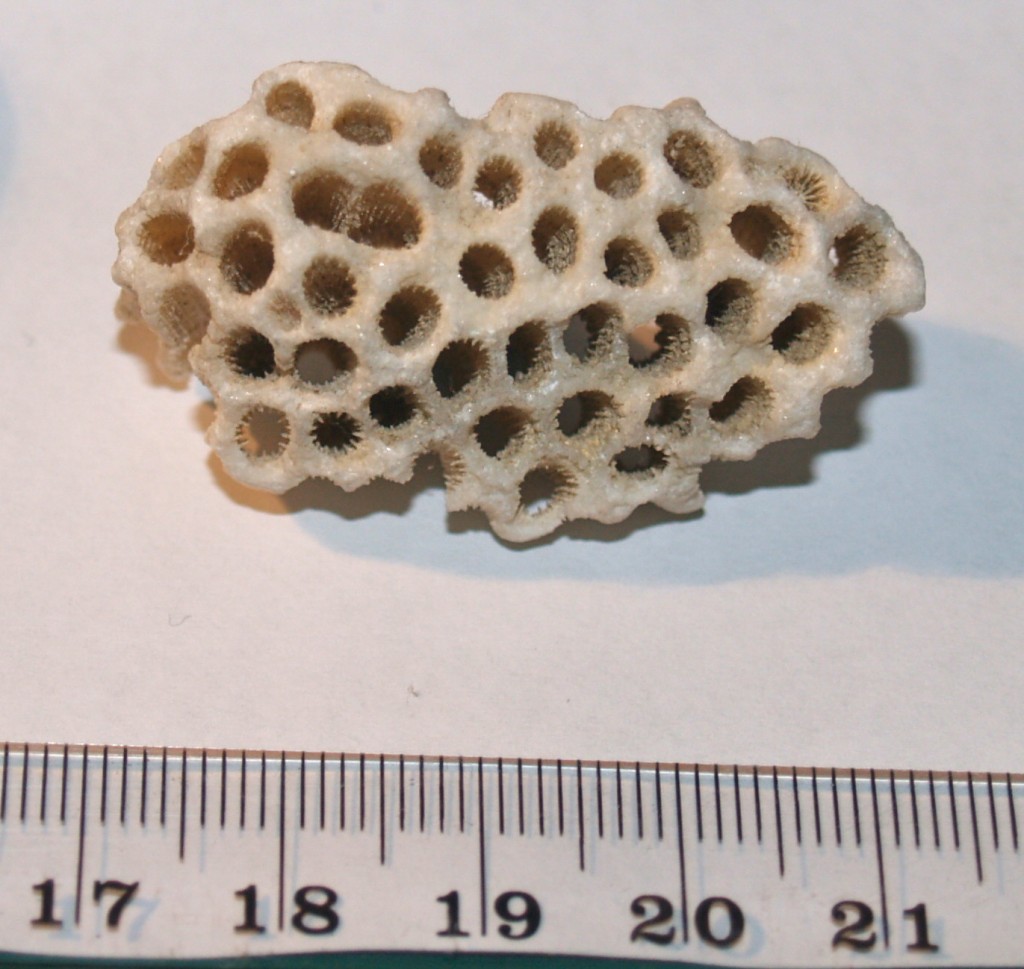 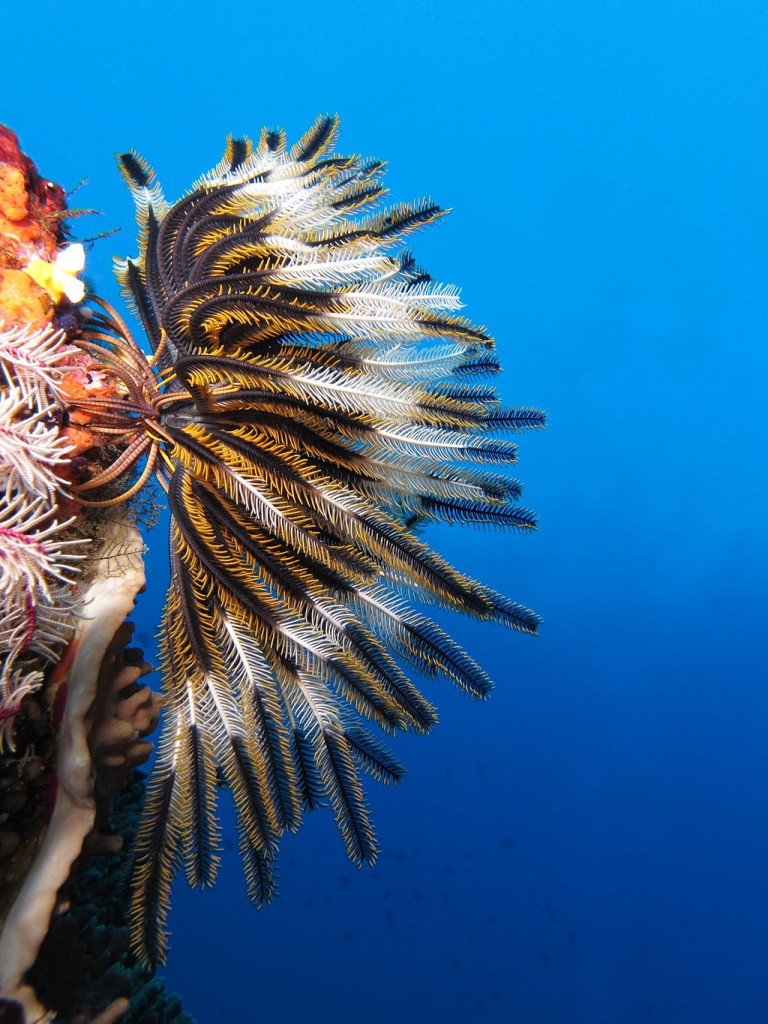 Crinoids tend to have small tube-like structures that could be what we see in the stones. There have been some beautiful, almost complete crinoid fossils found. What you see could also be the remains of small shellfish, i.e. their shells (see the photo below). I don't know what rocks are native to your area but, whatever, the stones you sent will now take their place in my rocks and minerals collection. They are my first from Canada. 🙂

Below is a rock I picked up on a beach. You can see, like the samples you sent, it has been rounded by water action. Can you see the shell fossils embedded in it? In these cases, you can see the shell was from spiral shell type similar to ones I sometimes find washed up on our beaches. 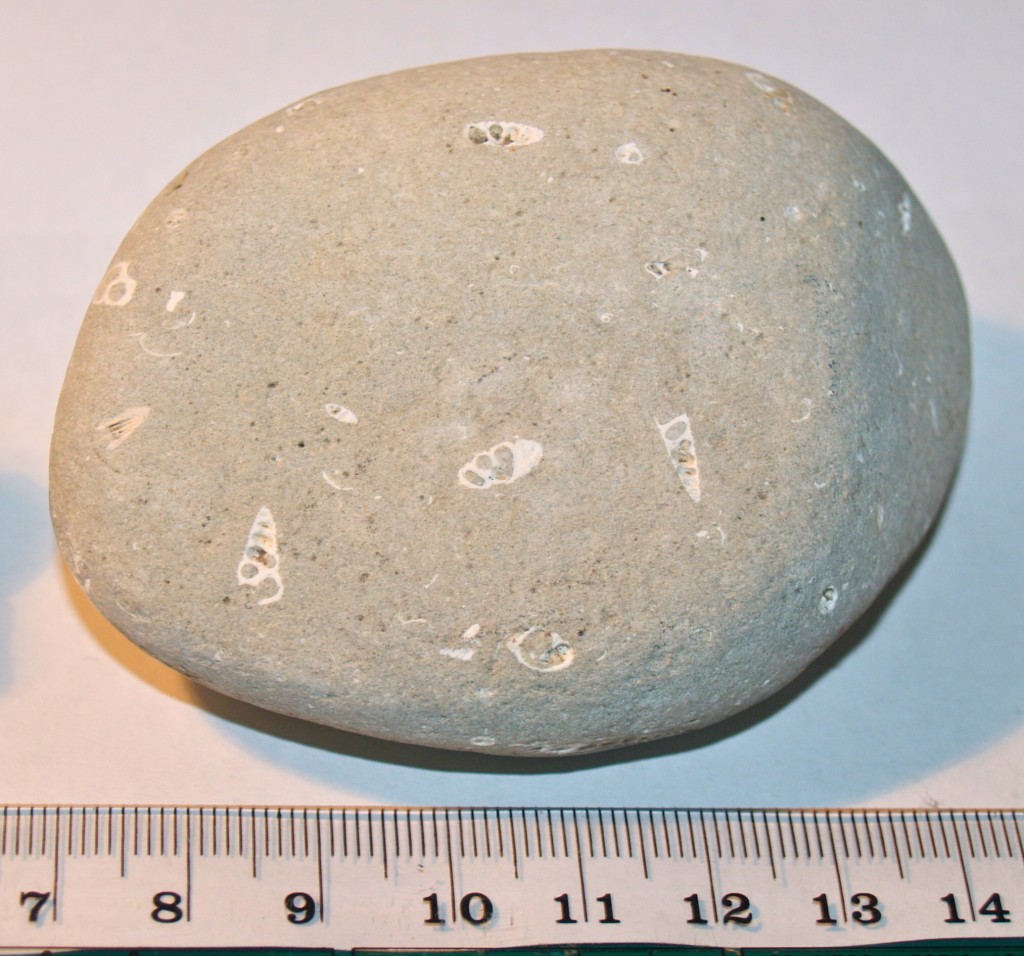 Did I say "something sounding fossil-like" back there? I'll explain.

You know my mind tends to wander in many directions and this is what happened when I saw the packet of chalk. The question came to mind, "What is chalk?" I thought I would share my answer with you. 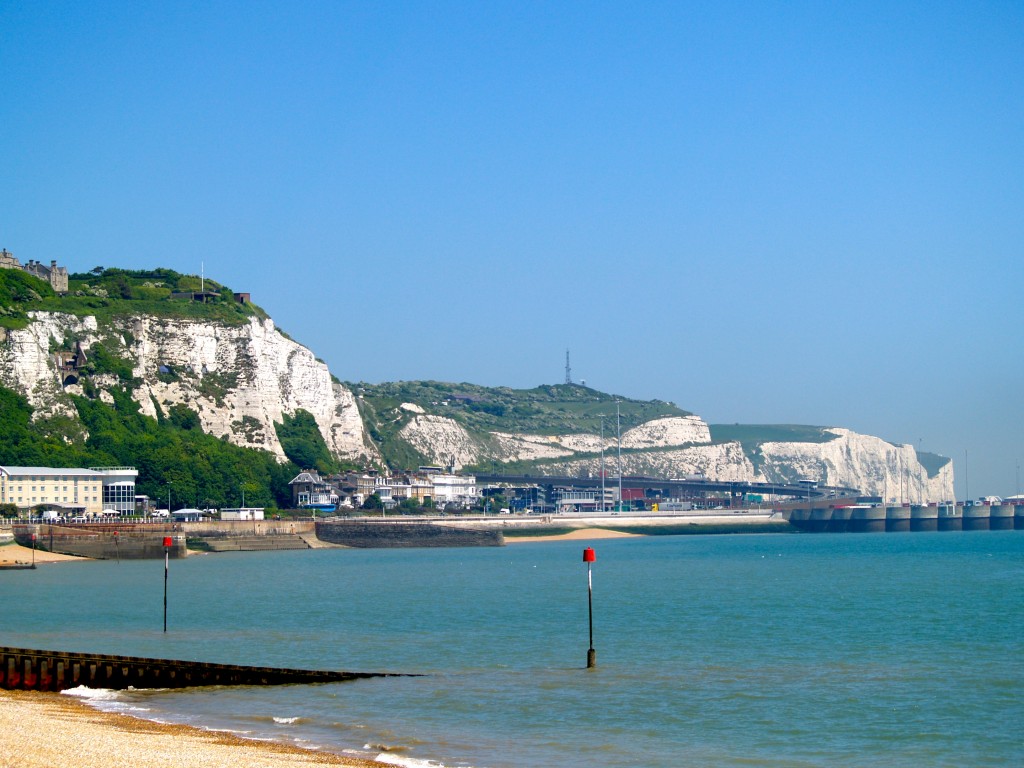 I took the above photo when I was in Dover in England. It shows the famous White Cliffs of Dover. The cliffs are chalk but what exactly is chalk?

Here is a quote from Wikipedia...

"Chalk is a soft, white, porous sedimentary rock, a form of limestone composed of the mineral calcite. Calcite is calcium carbonate or CaCO3. It forms under reasonably deep marine conditions from the gradual accumulation of minute calcite plates (coccoliths) shed from micro-organisms called coccolithophores."

What this means is chalk has formed under the ocean from the remains of algae so tiny you would need a microscope to examine them properly. Can you imagine the cliffs of chalk in the above photo would have involved many billions of these tiny organisms over a very long time?

Is this the same chalk you sent? While it could be, much of the blackboard chalk manufactured today is made from a stone called gypsum. Below is a photo of gypsum from my collection. This particular piece is known as rose gypsum because of its appearance. (It is shown glued onto a shell for display.) 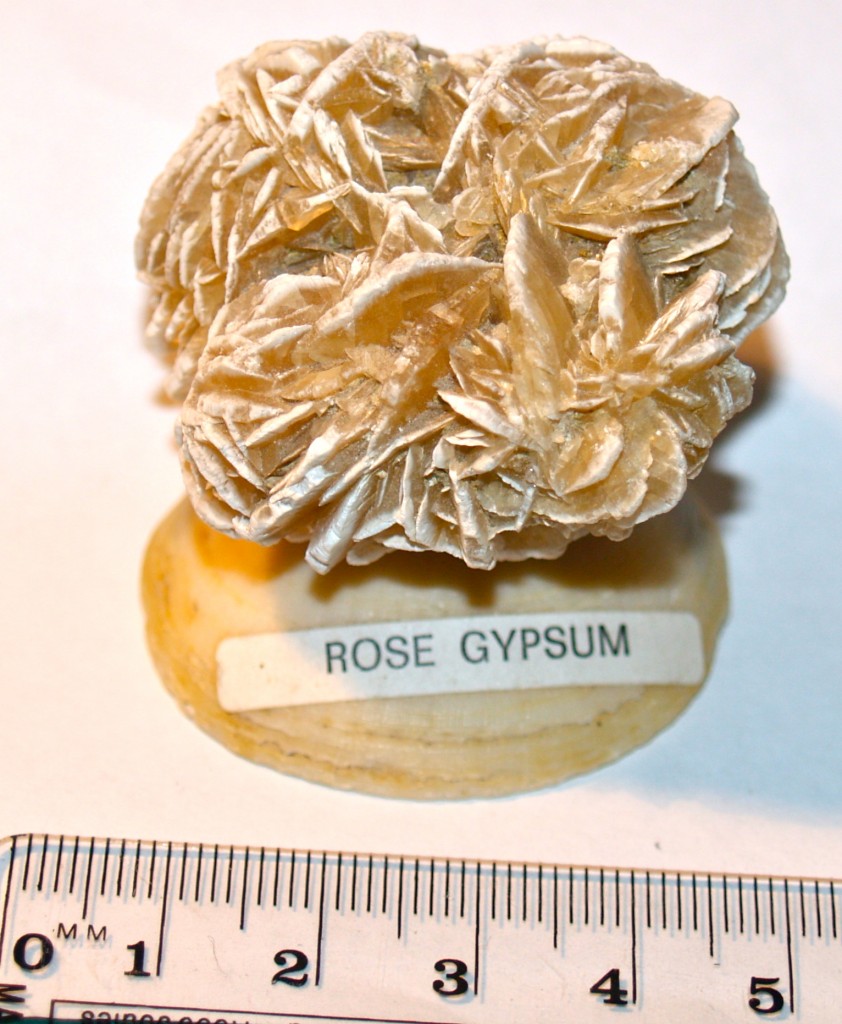 What was the third option for the stones you sent?

I can be a very curious person when seeing something interesting. This is what happened when I was looking at the rocks.

I suspected I might not be looking at fossils in rock at all so I broke open the smallest piece of stone so I could examine its centre. I found the stone was made of small crystals. Below is a graphic showing four photos I took of one of the pieces of the small stone. Can you see the shine of the small crystals? 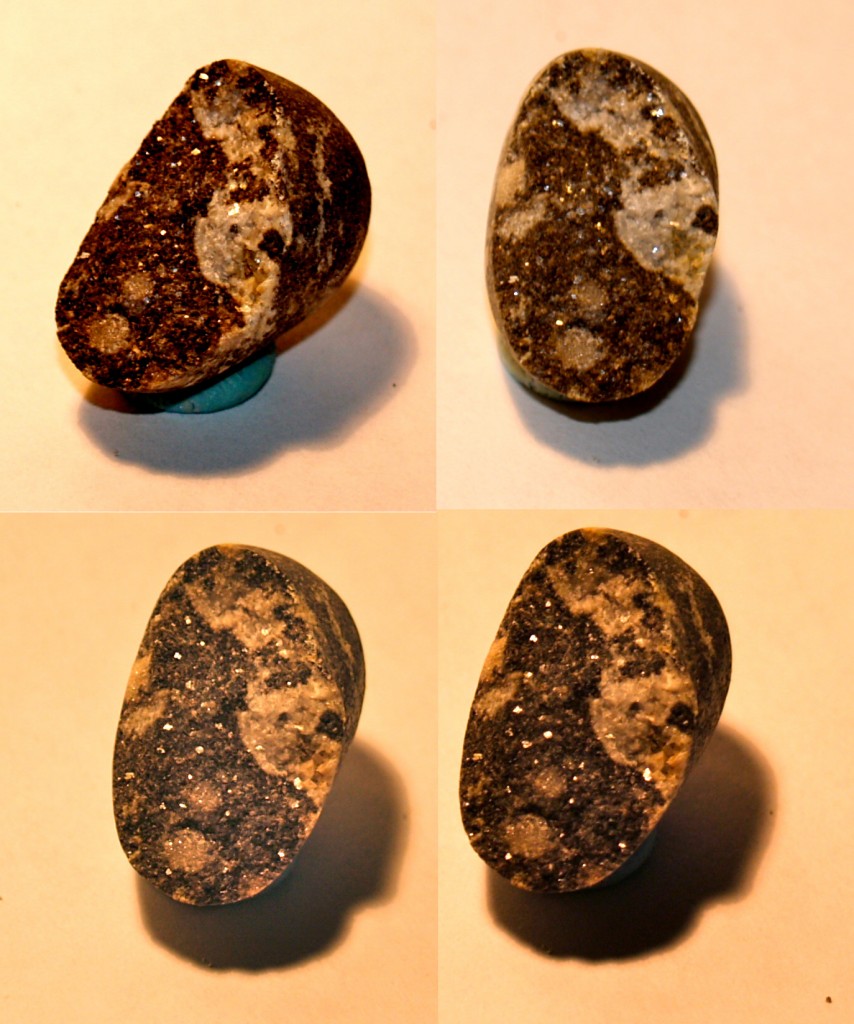 Now I was really curious because I suspected the stone wasn't fossil bearing sedimentary rock. I thought it might actually be igneous rock, i.e. volcanic rock. I spent more time searching my rocks and minerals books and the internet. I think I might have found what the stones could be. I think they might be diabase (aka dolerite).

Below is a reference for diabase. Visit the site and look at their photo of diabase. Tell me what you think.

Of course, I could be completely wrong but it is fun to try to find answers even if they're sometimes wrong. We can learn from both right and wrong answers if we keep our minds open.

I just had an afterthought on rereading this post and thought I'd share. When I broke open the small rock and looked inside, I realised I was the first person to have ever seen what's inside that particular stone and now I'm able to share what I found. In your lives, you will have many first person experiences. Will you recognise them when you do? I wonder if that makes us all curiosity explorers a little like early explorers seeing somewhere for the first time?

2 thoughts on “Something Special from Canada”