Yunus left a comment on an earlier extended comment where he commented and asked for more information. Here is a link to the post. scroll down to find his comments...

Yunus on "What technology did I use when younger?"

"The Video Cameras were really small but very interesting."

Rather than the video (movie) cameras being small, it was the film used in them. The cameras really worked by taking many small photos. They were one after the other on plastic film. Each photo in the film was only 8mm wide. When they were run through a movie projector, they flashed on the screen one after the other quickly enough so we saw them as moving pictures (movies).

Look at this animation I made showing a drawing of a projector. On the left you can see a small movie playing. It was made with an 8mm movie camera. When using a movie projector, you would make in look larger  when the projector showed the movie on a screen. Until recently, cinemas used movie films and large projectors. The only difference is their film used a 35mm series of photos. There were some cinemas using even larger film.

Now I will show you some photos. I still have the movie projector I used in schools back in the 1970s. An uncle also gave me his old 8mm movie camera. I have put a ruler in the photos so you can see their size.

Super 8mm Movie Camera. This one also recorded sound. There was a tiny magnetic strip on the film for the recording of sound. It was like a tiny strip of cassette tape if you have seen them. You can see a reel of 8mm movie film beside the camera. 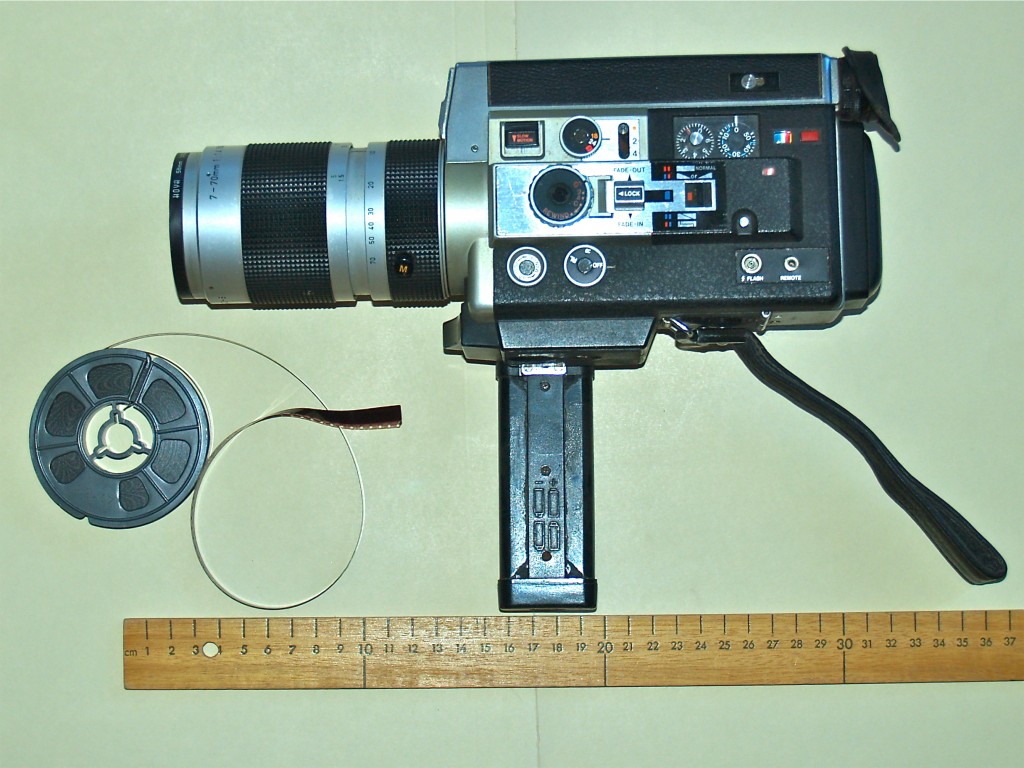 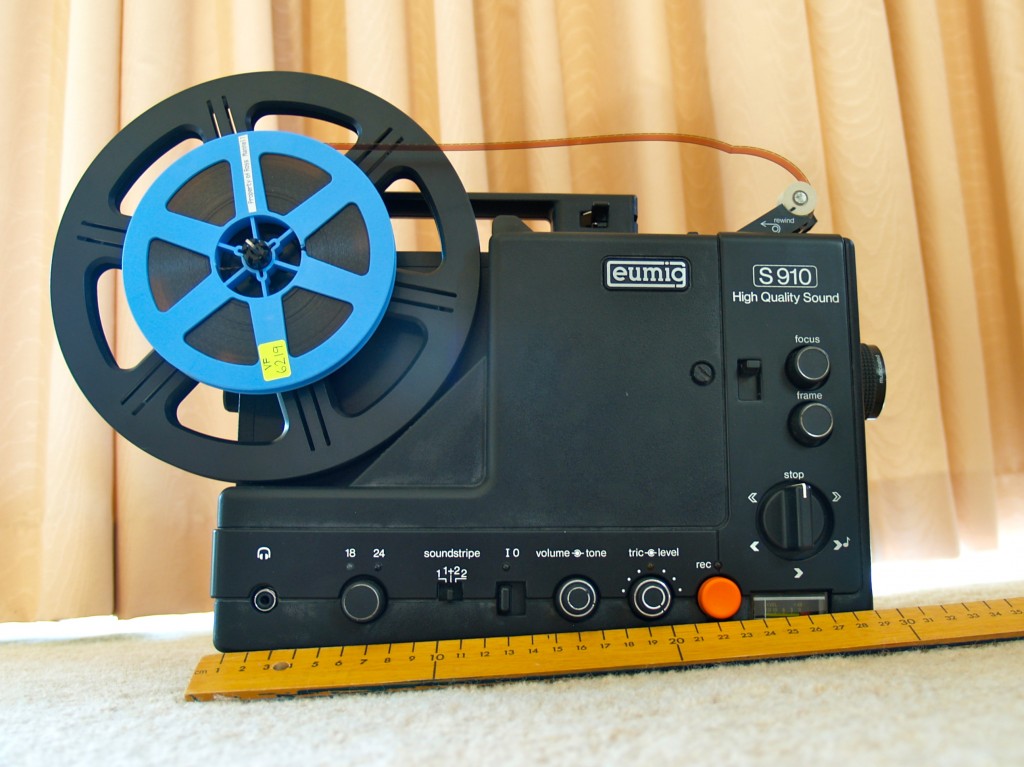 The next photo shows you a scan of some 8mm movie film and a ruler. You will see the film is 8mm wide. I have shown four sections of the film. 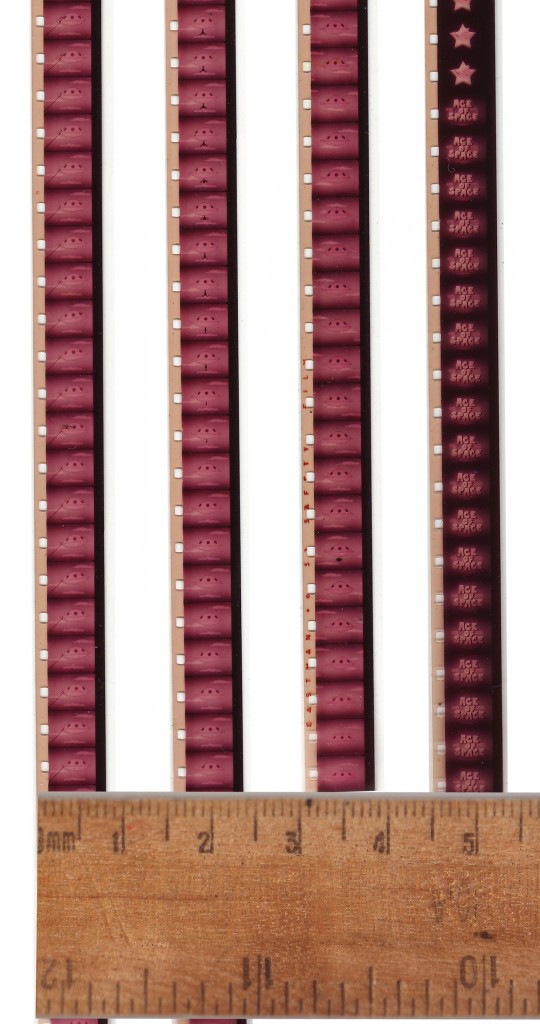 Now let's look closer at four pieces of 8mm film I have magnified. You can see it is a series of pictures. To save on drawing of cartoons, cartoon films like this used two of each picture. You can see slight changes in the frames. When each picture is projected quickly in turn, we see them as a moving picture. Click on the film to see it larger so you can have a closer look at each frame (picture). The third strip of film shows a scene change after two frames. You can see a car on a road changes to a flying saucer. 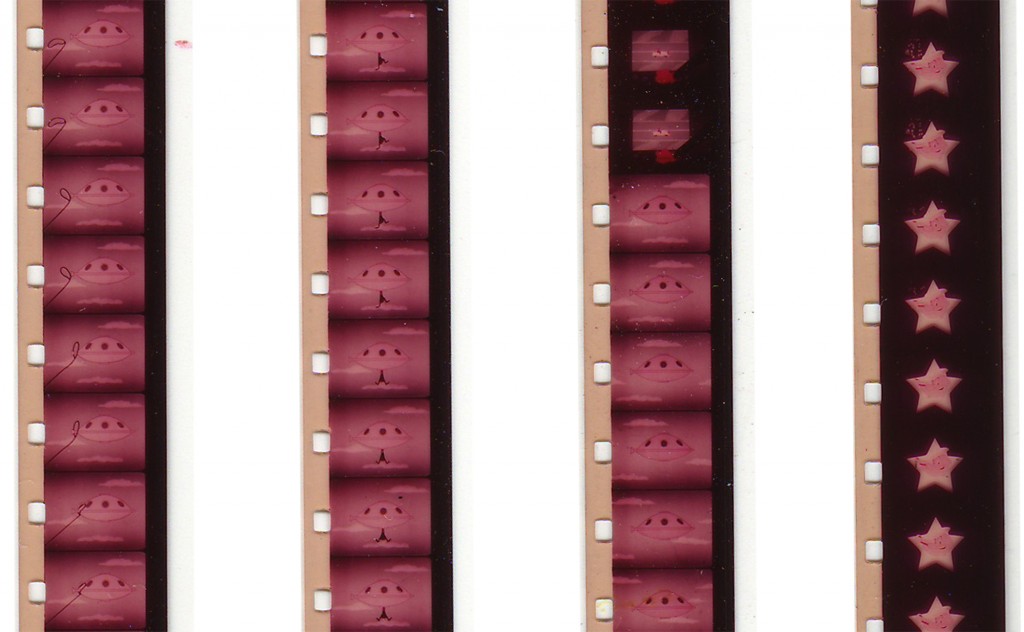 To show you how the brain is fooled by the pictures, here is a video clip looking at the eight frames of the first of the pieces of scanned film.

Let's look at another video clip made using 14 frames from an 8 mm showing a person. You will see the film at 2 fps (frames per second), 6 fps and 12 fps. When we had film taken on a camera and not a cartoon, each frame is different as a person or thing moves.

"How did you have to use the Hole Punchers?"

I think you must mean the holes punched in the film. If you look at the film scan above, you can see holes on the left hand side of each film strip. The projector cogs would grab these holes to pull the film through. Notice each hole is in the middle position to each frame. This makes certain  each picture appears correctly.

The first movie camera appeared in the 1880s. The camera operator would wind a handle. A shutter would open then close to expose a frame of film. The film would then move to the next frame. Frame after frame the films were made as the camera operator turned the handle. At this early stage, movie cameras were more like a novelty. The earliest known film comes from 1888...

The first films were just of everyday scenes but some realised films could be made to tell stories. Here is a film made in 1902. Again there is no sound. Cinemas would have musicians playing music and possibly people making sound effects as the movie played. This clip has no sound. The film is called "Le Voyage dans la Lune" (A Trip to the Moon).

There were attempts to record sound but it wasn't recorded by the camera. The early attempts had trouble keeping the sound in synch (in the right place) in the movie*. By 1923, they had worked our how to synch sound and in 1927 "The Jazz SInger" was released as the first movie with sound.

Charlie Chaplin first appeared in a film in 1914. When sound came along he, like many others, thought it wouldn't last. People, they thought, would always prefer silent films. He continued making silent films into the 1930s but in 1940 he produced what was probably his first talking movie, "The Great Dictator". He wanted to make a film condemning Adolf Hitler before America entered World War II. I have this film in my DVD library. It is my favourite of all of his films.

* Synching sound means putting the sound to a film so the people's mouths move to the sound as they should and music plays in time with dancers or people playing musical instruments. From my first video camera I owned I was able to record sound but the quality wasn't always good. There could be, and still is, a problem with noises from the audience.

In 1985 I filmed my first school production. A high school known as Prairiewood High in Sydney knew of my filming and asked me to make a VHS tape for them. Wanting better sound, they gave me an audio cassette tape of the production. It contained the sound from the microphones so little could be heard of the audience. In order to synch the sound, I had to drill a hole through a cassette player and tighten or loosen a screw to slow (tighten) or speed up (loosen) the sound.

These days I use a digital audio recorder and can line up sound on the computer.