NUMBER 100: As the recipient of my 100th Extended Comment, Mrs. Yollis and class will be receiving a copy of “Wombat’s Secret” book, Bruce the Wombat, a Potoroo Palace souvenir (where I take many animal photos) and postcards of New Zealand including Mt. Cook mentioned in this post.

To view the original post from Mrs. Yollis and class...

Your map is most certainly not the size to put up on a wall in class.  🙂

When looking at your map of Asia, the continent closest to Australia, it made me think of the long history of the various cultures of Asia, the diverse landscapes, and the interesting people who have added so much to our world. I know my family can trace some of my ancestors back to Asia as would be true for so many of us.

Looking at the map, it also made me consider what has often been called the Indian Subcontinent. Perhaps some of you have heard of continental drift? It’s where the surface of the world is really a series of “plates” floating on the magma (lava) layers below the surface. Scientists call the plates, tectonic plates.

India is on a separate plate to much of Asia, as is much of what many call the Middle East. Over many millions of years what was thought to be one large mass of land has broken up with sections drifting away. Some call that ancient land mass Pangaea. Here is a Wikimedia Commons graphic of Pangaea showing the positions of where today's tectonic plates might have been.

For more information about Pangaea, here is the Wikipedia link.

According to Wikipedia, Pangaea started breaking up about 200 million years ago.  At that time, what was to become India was closer to Africa, Antarctica and Australia. India’s plate broke away and headed north eventually running into the Eurasian plate where we see it today. It’s this very slow collision of the plates that caused the great mountains of the Himalayas to rise, including Mount Everest.

Don’t you love the numbers involved? A small amount can, given time, become a big amount.

If you look at the following picture from Wikipedia, you can see the positions of the modern tectonic plates. You will see you’re on the North American plate and it is pushing along the Pacific plate. You would all know one of the places where this is happening. Have any of you seen the San Andreas Fault?

Looking at some of your buddy classes in “Our World, Our Numbers” you can see Canada is also along the same plate border with you. Your New Zealand buddies are also on a border but their border is between the Australian and Pacific plates. Your Australian and United Kingdom buddies aren’t on the border of their plates.

Imagine, without this movement we wouldn't have magnificent mountains like New Zealand's Mt. Cook... 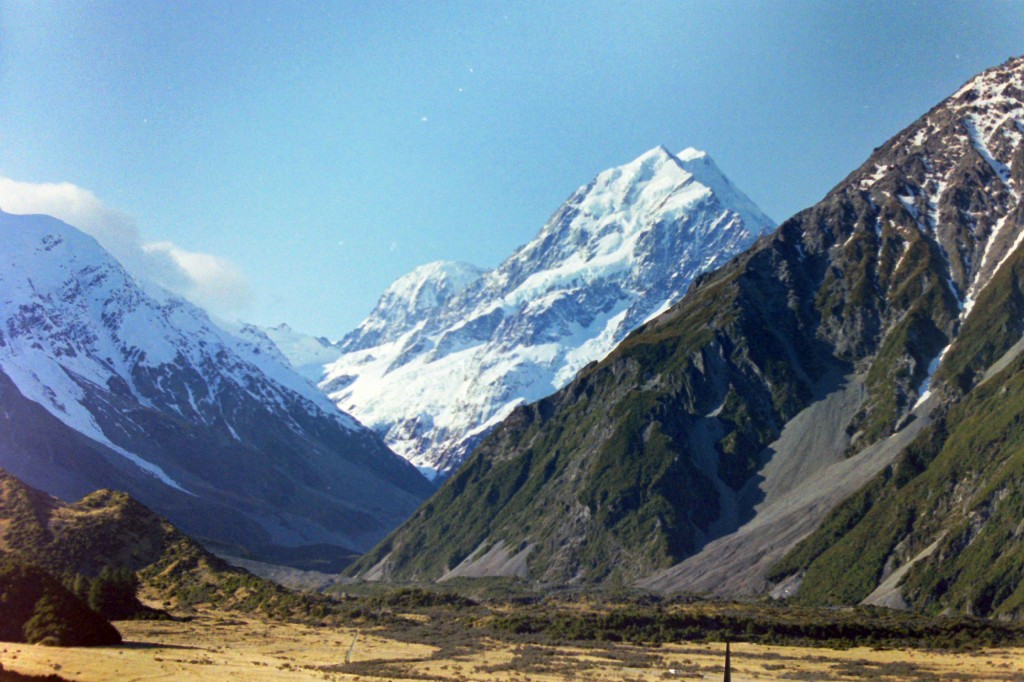 Here are two videos showing information about plate tectonics. The first link is to an easy to understand animation.

11 thoughts on “Plate tectonics and our dynamic continents for Mrs. Yollis and class”

Leave a Reply to Heather and Keira Cancel reply