Music and Art of the week- summer term week 3

I’m a little late responding to week 3 but, featuring a van Gogh painting, I had to drop in. Firstly, the music…

I think I have already noted I have a broad range of tastes in music and have traditional music from around the world, Gregorian chants, renaissance, etc as well as much more modern music, including from some in the current charts.

Music adds colour to life and is wonderful in various situations whether I want something lively to brighten the day, classical to concentrate when working or assorted when I comment on blogs or write. Mood always determines the choice of music.

I like and have heard both pieces. Although both seem to be of someone trying to recover from relationship problems, the first has more emotions of hurt and determination to get up again. The second is lighter and has a faster tempo and suggests your words won’t hold them back.

Which is your favourite and why?

At this particular time, I would choose Selena Gomez and her “Who Says”. I like the idea of being able to ignore those who would bring you down by nasty comments… “Who says I’m not perfect?”

Perhaps another day I might have chosen the other as both are good listening and carry messages of not letting others keep you down.

How does the music make you feel?

I think “Skyscraper” is a little more depressing in its lyrics whereas “Who Says” has a quicker tempo so is a little brighter. Both carry a psotive message.

How are the similar/different to the pieces of music we have had over the past few weeks?

Week 1 concentrated on music blending traditional African sound with more modern music. I particularly liked the Ladysmith Black Mambazo track but that is because I have one of their albums.

Week 2 was more in line with European classical music with Saint-Saëns’s “Aquarium” and a version by Orbit.

Week 3 is the more recent popular music most students would know.

Does either piece link into our art at all?

Considering the life of Van Gogh, the music has more to do with the life of the artist. In his lifetime, he only ever sold paintings to his brother yet he didn’t give up on his art. As in “Skyscraper” , he got back up again when his art didn't sell and he wasn’t held back by the lack of acceptance of his art. His paintings are now very highly valued.

If the artists (people who sing the songs) switched round, so they sung each other song, do you think they would sound the same or not?  Why/Why not

The two singers have different styles and approaches to the music. If we go back to Week 2’s Saint-Saëns and Orbit, you can hear the different approaches on the same theme. The songs would be unlikely to sound the same but might be similar. 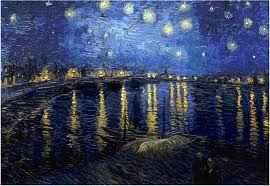 Do you like the piece of art?  Why/Why not?

I recognised the painting as it is from an artist whose paintings I have always admired. The short brushstrokes and colour bring out the reflective night scene. The elderly couple in the lower right add to the scene of a gentle evening under the stars.

What is the picture called?

“Starry Night Over the Rhone”. The painting has its own Wiki page including a modern photo of Arles from near where van Gogh must have painted.

How does the picture make you feel?

Serene. Night scenes with reflected light and starry skies can be calming because of their gentle topic.

Who painted the picture?

The Musée d’Orsay website page on the painting has close up images of the brushstrokes. The painting made use of short brushstrokes blending colours on the canvas.

Do you think the picture is realistic/based on real life?

Refer back to the link under “What is the picture called?” and you will see the picture is most definitely based on real life and is realistic.

What can you notice if you look carefully at the picture?

Starting from the upper portion we see the night sky dotted with stars over a riverside township. Light from the town reflects off the rippled river waters. In the foreground, a boat is moored on the riverside and an elderly couple are having a starlit walk.

One tribute to Vincent van Gogh came in musical form from Don McLean when he wrote the song, “Vincent”.  It tells of his art and life. They lyrics can be found at…